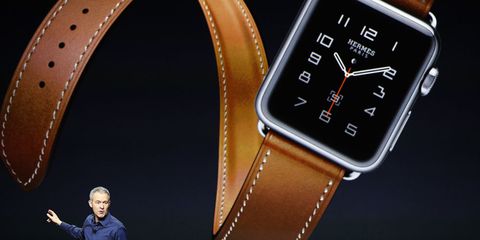 There's a new iPad in town. "Today we have the biggest news in iPad since the iPad," Cook said on stage, before unveiling the iPad Pro. Why build an even bigger iPad? "It's a magical piece of glass you hold in your hands," Apple's Phil Schiller said. "You can do things a smartphone can't do because it doesn't have to fit in your pocket."

The iPad Pro has a larger display than previous versions, measuring in at 12.9 inches diagonal, 2732 by 2048, for a total of 5.6 million pixels. The width of the iPad Pro is the same as the height of the iPad Air, and the device weighs in at 1.57 pounds (by comparison, the much smaller original iPad weighed 1.54 lbs.). The iPad has a variable refresh rate, a first for an Apple device, allowing it to save energy when it is not displaying fast-moving items. The device comes packing a new A9X chip, the third generation of Apple's 64-bit chip, making it 1.8x faster than the A8X it replaces. It's just 6.9 mm thick.

The iPad Pro has a four-speaker audio system, an Apple first, that gives the device a stereo effect. The iPad Pro offers 10-hours of battery life on a single charge. It has an 8-megapixel built-in camera, and comes in silver, gold, and space gray.

A new "Smart Keyboard" adds a soft keyboard to Apple's standard Smart Cover, giving the device a Surface-like look. A new device called "Apple Pencil" takes things a step further, working as a stylus of sorts for drawing on the tablet. The pencil charges using the lightning port on the tablet, and as a low latency level so it feels like you're drawing on the tablet (some other styluses have a bit of a delay). Apple even trotted out a Microsoft executive to explain how the Apple Pencil could integrate into working on documents.

Apple also unveiled the iPad Mini 4, which is essentially the iPad Air 2 in a smaller package.

Apple kicked things off with an update on the Apple Watch. Although the Watch has been out for just a few months, Apple took the opportunity to show off what's coming for the Watch in the future. An on-stage demo showed off new features coming to the Watch with the next version of Watch OS, including public transportation directions and new Watch Faces.

There are already more than 10,000 Watch apps in the App Store. With Watch 2.0, developers will be able to create even more apps, specifically apps that run natively on the watch, and take advantage of some of the Watch's hardware components. Several apps headed to the wearable include Facebook Messegner, GoPro (the Apple Watch will become a viewfinder for the camera), and AirStripOne, an app for medical professionals. That app do things like monitor a patient's heart rates or, in conjunction with another piece of hardware, monitor the heart rate of a newborn. In addition, Apple Watch OS 2.0 will be available September 16.

Apple also showed off new collection of Apple Watches made in conjunction with Hermes. The Watch models will be available in October in select stores, and come with a Hermes Watch face as well as one of three distinctive Hermes-branded leather Watch bands.

The Apple Watch will also be available in gold and rose gold in anodized aluminum. They'll be available at the same price as the standard Sport mode. Apple is a also updated the classic leather band, added a new "fall lineup" of colored bands, and is now offering a new (Product) Red Watch.

During its roll out of the (very impressive!) iPad Pro, there was an odd moment in Apple's presentation: when the Apple Pencil was announced. The crowd, which had previously applauded everything from customer satisfaction ratings to battery life, laughed.

Why? Well, for one, Apple's Steve Jobs was famously against the stylus. "Who wants a stylus?" he asked when debuting the original iPhone in 2007. "You have to get 'em, put 'em away, you lose 'em, yuck. Nobody wants a stylus." During another presentation, he said simply: "If you see a stylus, they blew it."

But there's also the price point: $99 for a stylus isn't unheard of in the world of Wacom tablets, but it's pretty high end. For Apple users that have gotten used to using their fingers—"the best pointing device in the world," as Jobs famously put it—that's a lot to throw down.

Apple pencil is the technology version of the Supreme crowbar

If you see someone using an apple pencil force choke them.

Of course, if previous Apple products are any indication, we imagine there'll still be plenty of people lining up to buy one, along with the iPad Pro, when it debuts this Novemeber.

iPhone 6S and 6S Plus

After months of leaks and endless rumours, the iPhone 6S and larger iPhone 6S Plus have finally been officially unveiled.

Announced during the company's September 9, 'Hey Siri' event, Apple has confirmed the eagerly awaited phones will feature designs largely similar to their predecessors, with a number of specs improvements thrown in to freshen things up.

"I am thrilled to show you the newest iPhones," Apple CEO, Tim Cook said in unveiling the new devices. "While they may look familiar, we have changed everything about these new iPhones."