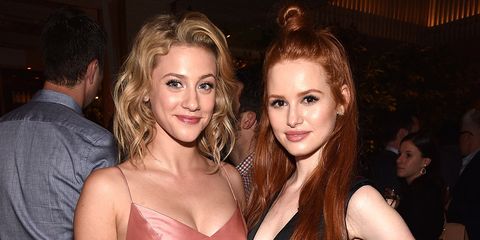 Riverdale is nothing if not masterful at hooking viewers with a gripping mystery. This season, the million dollar question is: Who is the Black Hood, the mysterious antagonist who shot Archie's dad in Pop's and killed Ms. Grundy, among other crimes.

At Marie Claire's Fresh Faces event in Los Angeles this weekend, Riverdale stars Lili Reinhart and Madelaine Petsch talked about show spoilers and how they would feel if their characters turned out to be the Black Hood (as implausible as that may seem, this is Riverdale, so we can't count anyone out).

Being a part of the cast doesn't mean getting lots of advance, insider information about the show's twisty plot. Petsch says she and her castmates learn about the season's plot script-by-script.

"If I bug Roberto [Aguirre-Sacasa, Riverdale's showrunner], I could maybe get like a hint because he loves to tease us just as much as he teases the fans," she said.

Petsch also revealed that the cast wasn't told much about the Black Hood ahead of Season 2—like, at all.

"[Roberto] actually texted us a photo of the original Archie Comics Black hood from the cover and is like, 'Guess what?' And then he's like, 'No one is safe.' And I was like what does that mean? And then it turned out he was a serial killer."

Even the main members of the cast aren't totally safe from the show's epic plot twists. Petsch is very chill about the possibility of her character, Cheryl Blossom, being the bad guy behind a future mystery.

"They toyed with the idea last year," she said, referring to Season 1's 'Who Killed Jason Blossom' plot. "I'm not worried about it. It's the nature of the business. It is what it is."

And what if Cheryl is the Black Hood?

Reinhart is less enthusiastic about her character, Betty's, potential as the Season 2 villain.

And as for the possibility of Betty somehow working with the season's villain?