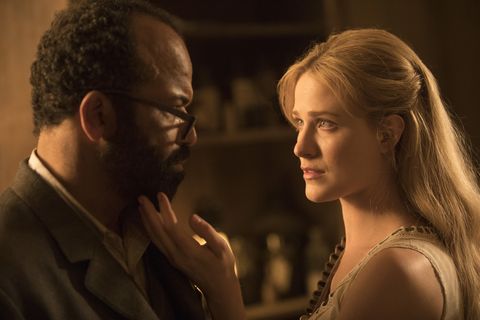 Westworld is now three episodes into its second season and we honestly still don't know much more about what's going on than we did at the end of Season 1—not that that's totally a bad thing. Part of the fun of Westworld is being utterly confused at all times and crafting wild guesses and fan theories to make sense of the jumble of facts presented on screen.

Because we know the Westworld timelines are numerous and confusing, let's start by establishing when we are this week: We are in the present day (approximately two weeks after the massacre) and just after the events that began the robot uprising.

But, for once, the when is less interesting than the where in Westworld. This week Westworld introduced us to not just one, but two new Delos parks: Raj World and Shogun World. Here's what we know:

The episode opens on Raj World, with no explicit indication that that's where we are (but it's obvious). The Raj World portion of the episode introduces us to two human guests of the park, Grace (Katja Herbers) and Nicholas (Neil Jackson). Grace and Nicholas are interesting in that they explicitly want to interact with and seduce fellow humans, as opposed to the hosts who are a "sure thing."

When they retire to Grace's room to have sex, she actually shoots Nicholas as a test—if the shot kills him, it means he's a host. If it doesn't, it means he's a human. It doesn't kill him and the boinking commences. Later, they arrive at a campsite that appears to be part of a big game hunting storyline they're participating in to find a pile of dead bodies. The concerning part? Grace recognizes the dead from the train ride into Raj World—they're guests, not hosts.

Yep, the uprising/glitch/whatever you want to call it has also impacted Raj World.

The host who drove them to the campsite goes off script, killing Nicholas and very nearly killing Grace as well. She manages to shoot him at the last second and flee the campsite. In the wilderness, she spots a bengal tiger, which chases her outside of the park limits and to a large body of water. She shoots the tiger as it leaps at her, knocking her into the water.

This explains, of course, how we end up with the mysterious dead tiger Bernard finds in Season 2, Episode 1 (the events in Raj World take place two weeks ago, concurrent with the uprising in Westworld).

Grace also makes it to the shore in Westworld, only to be immediately confronted by Ghost Nation warriors. Girl can't catch a break.

It's worth noting that fans predicted Raj World. Reddit user EightB1ts, in particular, laid out the evidence for the park in an extensive post.

Finally, after so, so much teasing, we finally seem to have arrived in Shogun World.

"Virtù e Fortuna" finds Maeve continuing her search for her daughter with Lee and Hector in tow. When the trio encounter a group of Ghost Nation warriors who Maeve is unable to command, they flee into the park's underground tunnels and meet up with Felix, Sebastian, and Armistice. They try to navigate the park from the tunnels and think they're near where Maeve's daughter should be.

In reality? They've accidentally stumbled into Shogun World and the episode ends with Maeve being rushed by a Samurai brandishing a katana. Then cut to black. Thanks for that, Westworld.

And, because we can't totally neglect the action going on in Westworld, it basically boils down into a few main beats.

Dolores connects with the Confederados at Fort Forlorn Hope and convinces them to fight with her against the Delos security agents, only to sacrifice her new army in a last-minute double cross.

During this time, she reconnects with her "father," Peter Abernathy, who is glitching like crazy thanks to the shoddy code he was loaded with to help him smuggle Charlotte's oh-so-valuable IP out of the park. She enlists Bernard to help fix him, but the "immensely complex encryption key" eludes even Bernard.

While Bernard is trying to fix Abernathy and Dolores is preoccupied with the Delos security agents attacking the fort, Charlotte sends in a stealth team to extract Abernathy—and she actually succeeds.

At the end of the battle at Fort Forlorn Hope, which the hosts win, Dolores orders Teddy to kill all the surviving Confederados. Teddy, being plagued with pesky things like empathy and compassion, lets them go instead. Dolores witnesses the betrayal and she doesn't NOT look pleased. Teddy's miraculous survival streak might be ending.