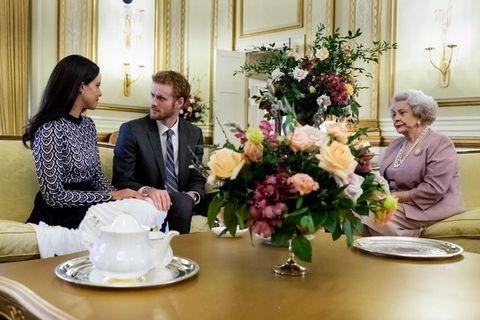 Look, we get it. Weddings are nerve-wracking on so many levels, even if you're not about to become royalty. But as a guest at a royal wedding, you're expected to Bring It with your outfit, because you're up against A-listers and other royals who have stylists, tailors, and the like to do the sartorial heavy lifting.

For us mere mortals, buying off-the-rack always runs the risk that someone else might be rocking our lewk, too. And as guests were filtering into the chapel where Meghan Markle and Prince Harry wed today, one Twitter user pointed out that not only were two people wearing the same dress, but it also happened to be one of the frocks that appeared in "Harry and Meghan: A Royal Romance," the Lifetime movie that aired days before the wedding.

Costume designer Claudia Da Ponte, who selected the clothes Lifetime Meghan would wear, told Town & Country earlier this month she tried to replicate as many looks as she could.

"Obviously with looks where there are no photos or evidence, it was a matter of what brands does she wear and what do you think she would have worn?" she said. "I just tried to stay true to her personal style."

That personal style equated to this Sweetheart Crochet Midi Dress by buzzy (and affordable!) British brand Self-portrait, which Meghan's small-screen counterpart wore to meet the Queen over tea.

And looks like there was even a third guest who wore an inverse version of the Sweetheart dress.

Rewatching and have spotted it again but in the reverse coloring pic.twitter.com/yMxsOVIY1i

In this case, I guess, imitation is the highest form of flattery?