The eternal goal for Thanksgiving Day: Find some neutral talking points that won't set anyone off before the turkey is carved. Now that you've cleared the path of dinner time land mines, hurdle number two is maintaining the peace after the dishes have been cleared.

Here, 13 non-snooze-worthy Thanksgiving movies to watch during that awkward time before dessert when everyone's comatose.

Watching Rocky (Sylvester Stallone) make it up and down those steps will be even more inspiring after you just stuffed yourself with turkey and mashed potatoes. Can't forget the iconic Thanksgiving dinner date night scene between Rocky and Adrian, which will put you in your feels and the Thanksgiving spirit. (Plus, you'll want to re-watch the classic before Creed II is released on November 21.)

Adam Sandler, Seth Rogen, Jonah Hill...what better trio is there to spend Thanksgiving with? The actors star together in Judd Apatow's Funny People, a film about a comedian diagnosed with leukemia who uses comedy to cope. Don't let the plot get you down though—the movie is completely hilarious and your parents will love it too.

Sometimes you just need turkeys with the voices of Owen Wilson and Amy Poehler to comfort you in these stressful times. Escape from reality by watching Free Birds, an animated movie in which Reggie the turkey tries to safely escape his Thanksgiving fate. Things take an interesting turn when the president decides to pardon him and he lands in an even unlikelier situation.

Grab a box of tissues for everyone (yes, including your teenage cousin who refuses to acknowledge that he has feelings) and prepare for some tears with this emotional pick starring Sandra Bullock and Quinton Aaron (based on a true story!). When the Tuohys take in a homeless teen (Aaron) and become his legal guardians, he realizes his potential as a student and football player—but not without plenty of ups and downs. Keeping up with the holiday's "thankful" theme and all, the movie's guaranteed to make the whole family appreciate each other.

Tom Hanks and Meg Ryan star in the classic rom-com You've Got Mail. Aside from its overall wholesomeness, the film's autumn setting in '90s New York City makes you feel like it's Thanksgiving no matter what time of the year it actually is. (Plus, it does include a scene that takes place on Turkey Day, so there's that!)

The premise: Two rival booksellers start a relationship online in the age of dial-up without realizing they know each other IRL. Inevitably, you'll end up reminiscing with the family on the days that you all argued about mom being on the phone for too long when you wanted to use the internet. We recently made our Gen-Z coworkers watch the rom-com classic in honor of its 20th anniversary, and they loved it.

Although this one's not explicitly a Thanksgiving movie, Fantastic Mr. Fox is a phenomenal family-friendly fall option (the cider! the cute animals! the food scenes!), and will keep you laughing through dessert. The lovable stop-motion Wes Anderson flick gathers a crowd of notable voice actors (Meryl Streep, George Clooney, and Bill Murray, to name a few) in a tale of a chicken-stealing fox who finally gets caught on a farm raid. After he escapes, three local farmers plot to end him by digging him out underground, so Mr. Fox enlists the whole community in an escape mission to save their lives.

The quintessential Thanksgiving film is a John Hughes (Ferris Bueller, The Breakfast Club) flick that's one of his best, even if there are no cool teens involved. Planes, Trains, and Automobiles is a road story about two ill-matched travelers who are forced to band together to make their way cross-country to get home for Thanksgiving. In classic Hughes fashion, the screwball rapport between Steve Martin and John Candy drives the movie, and there's a lot of heart and (non-dad-joke) humor to go around.

From director Ang Lee, Eat, Drink, Man Woman is one of the best movies ever made (in our humble opinion), about three unmarried daughters who live with their chef father. Though their lives are diverging and they're outgrowing their traditional upbringing, they can count on one thing: an elaborate weekly dinner, thanks to which, they stay up-to-date on each other's lives.

This year, relive the macabre hijinks of the Addams Family while simultaneously witnessing the epic Thanksgiving takedown (and impressive history lesson) pulled off by Wednesday Addams. It's lighthearted enough for everyone to enjoy, and doesn't require a full attention span in case you need to steal away for another slice of pie.

Dawson's Creek-era Katie Holmes, we hardly knew ye. This very seasonal movie finds itself in New York City, which is a great option for food and Seamless–obsessed busybodies who don't cook. A Pippi Longstocking-ed rebel named April tries to round up her estranged family in the city after her mother is diagnosed with terminal cancer, but oven troubles and her lack of cooking know-how threaten to derail the day.

What the "celebrities falling" gallery is to your life, this movie is to every family who thinks they're dysfunctional. The catharsis of watching the Hood family prepare for Turkey Day during the Vietnam War era will make everyone feel better about their own weird relatives. Plus, the dramatic '70s climate makes for a classically unhinged movie. "Teen angst! Adultery! Suburban malaise! Hating on the president!"—the gang's all here, except this time it's not unfolding directly in your own life.

Another dysfunctional family flick for the books is this film, which stars a baby-faced Robert Downey Jr., a My So Called Life-era Claire Danes, and Holly Hunter, as estranged family members who navigate family politics and unearthed secrets as they gather for Thanksgiving dinner. It's definitely one to bookmark if you loved the Christmas movie The Family Stone. Fun fact: The movie was directed by Jodie Foster. 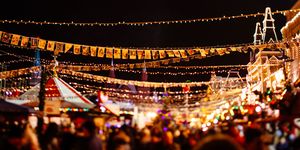 The Best Time to Book Flights for Holiday Travel

Adulting: How to Cook a Real Thanksgiving Dinner 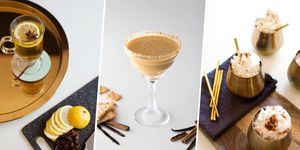 Thanksgiving Cocktail Recipes to Be Thankful For
Rachel Epstein Associate Digital Editor Rachel Epstein is the associate editor at MarieClaire.com, where she covers celeb and royals news, culture, lifestyle, and politics.
Advertisement - Continue Reading Below
More From Culture
The 10 Hottest Movies on Hulu Right Now
'The Bachelor' Has Already Finished His Season
Advertisement - Continue Reading Below
When Michelle Carter Is Expected to Walk Free
How Much Time Did Michelle Carter Get in Prison?
'Bachelor' Peter Made a Hilarious Video As a Kid
31 Movies That Are Only About Sex
Who Is 'Bachelor' Contestant Mykenna Dorn?
The Best Love Songs of 2020 (So Far)
A New Show About the Royals Is Coming to HBO Max
The Ultimate Valentine's Day Playlist