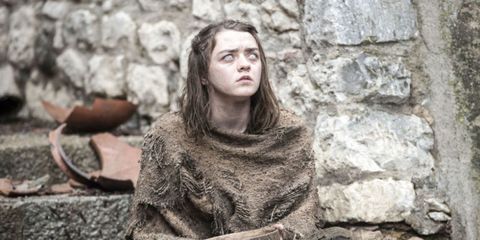 Game of Thrones fans were not happy to hear that Season 7 of the hit HBO show would be shorter than usual, with just seven episodes.

Maisie Williams, who plays forever badass Arya Stark on the show, is 100 percent behind the decision, though—and with good reason. Williams told Variety exactly why she supports the showrunners' decision to truncate Season 7, and we have to admit, she has a point.

"It sucks for the audience because they love the episodes, but what we'll never do on this show is drag it out, and I'm so thrilled about that," Williams explained. "Too many shows start out about making a great show, and by Season 6 it's about making money and all they want to do is write more episodes and make more money. This show makes a lot of money, and it would be easy for HBO to be like 'we're gonna do four more seasons and we're gonna extend them to 12 episodes.' I really respect David [Benioff] and Dan [Weiss] for holding their ground and for HBO to be like 'no... we're gonna tell this story and we're gonna end it and that'll be final.'"

At least she acknowledges that it sucks for the audience. Still, we do get it. Like Williams, we would rather the show end on top than drag on too long.

"Good things must come to an end or they're not good anymore," Williams told Variety. "It doesn't last forever and we've done what we came to do, it's time to wrap this up, and it will have the ending it was always supposed to have, and that's very special."

We're anxious to see that ending, but we'll have to wait until next summer for any new Game of Thrones. In the meantime, we'll adopt Williams' words as a mantra and just try to be thankful that the showrunners value quality over quantity.

Kayleigh Roberts Kayleigh Roberts is the weekend editor at Marie Claire, covering celebrity and entertainment news, from actual royals like Kate Middleton and Meghan Markle to Hollywood royalty, like Katie Holmes and Chrissy Teigen.
This content is created and maintained by a third party, and imported onto this page to help users provide their email addresses. You may be able to find more information about this and similar content at piano.io
Advertisement - Continue Reading Below
More From Culture
Cute Gift Ideas for Every Woman in Your Life
'The Undoing' Differs Sharply From the Book
Advertisement - Continue Reading Below
'The Undoing' Is Packed With Stars
Differences Between 'The Undoing' Book and Novel
It's Been a Weird Year for 'The Bachelorette'
Did Princess Diana Really Dance to 'Uptown Girl'?
'Bachelorette' Frontrunner Brendan Is an Actor
Everything We Know About Matt James
Zac Clark Could Be a 'Bach' Frontrunner
Who Is Noel Fielding's Partner, Lliana Bird?