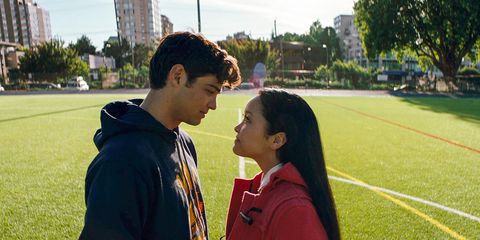 Netflix's push to revive the romantic comedy is in full swing, thanks to a spate of solid, charming offerings like Set It Up, The Kissing Booth, and now the extremely cute To All The Boys I’ve Loved Before, based on the novel by Jenny Han.

To All The Boys I've Loved Before hit the streaming site this week and is already getting some major applause for its inclusive casting, genuinely thoughtful approach to teen romance, and an overall sweetness that is sort of needed right now. And it is incredibly sweet. While the rom-com tropes come fast and furious in To All The Boys I’ve Loved Before (there’s a mom who passed away, a “fake relationship” plot, a school rival with whom the lead used to be best friends—you get the idea), its handling of them is surprisingly gentle. It does away with a lot of the ways those genre stalwarts could be problematic.

The plot follows Lara Jean Covey, a high schooler who’s prone to fantasizing about great romances. She writes feverish love letters to every boy who’s ever given her a little attention and stores them in a box in her closet—from her first middle school kiss Peter, to the guy who was nice to her at homecoming, to her sister’s boyfriend (and Lara’s former best male friend) Josh.

But when Margot moves abroad for college, dumping Josh and leaving Lara Jean to watch out for their youngest sister and single dad (the girls’ mother passed away years before), Lara tries to lay low for the school year and keep her pining to herself. Unfortunately, her youngest sister wants her to have a boyfriend, so she sends the letters to the boys Lara had written to. A lot of things happen, but the main one is that Lara Jean and Peter decide to engage in a pseudo-romance so that Josh will forget about Lara Jean’s letter and Peter can get his mean-girl ex back.

So, yes, many things happen in this movie’s 90-minute runtime! But it still works, and To All the Boys I’ve Loved Before is a freakin’ adorable summer movie and a really welcome addition to the Netflix rom-com canon. More than that, I found myself constantly wishing it’d existed when I was in high school.

Here are a few of the things that make it so damn delightful:

Lana Condor is a gem.

There’s a lot going on, story-wise, in this movie, but the reason it works instead of coming apart in a puddle of plot points is Lana Condor’s lovability. Her character, Lara Jean, is shy but not a pushover, and smart but not in a way that would be unrealistic for a high schooler. Sometimes when things are particularly trope-y, her narration saves the day. Plus, because Condor is Asian-American, it’s even more exciting to see her in such a big, thoughtful role. (We talked to her about this and more here.)

I’m sorry! I'm so used to him as the reliable love interest and now I only want him to do these role.

I’ve heard a criticism, usually from people who want to immediately throw the entire rom-com genre into the Frivolous Fluff Bin, that things like cinematography and editing are afterthoughts in any movie that's also supposed to be light-hearted. But the incorrectness and vague sexism of this idea aside, it’s still exciting to watch a movie in any genre (and especially one geared toward teenagers) that’s shot and edited as beautifully and thoughtfully as To All The Boys I've Loved Before.

Visually, it's considered and clever, from the sweeping neighborhood shots to the moody but cool music choices (The Pains of Being Pure at Heart!) to the snappy cuts from scene to scene. It's a really lovely film.

It has a very realistic outlook on high school.

There are typically two schools of thought in teen-focused comedies: “These are the best days of our lives!” and “High school is hell, get me out of here.” Neither are wrong, per se, but they’re not the whole picture. Lara Jean and her friends embody the idea that it’s more complicated than that. Yes, she’s kind of an outcast and the school bully goes out of her way to be cruel, but she also gets along well with the jocks that she later befriends and sees them as actual people. In one scene, Lucas (one of the boys she wrote a letter to) tells Lara Jean that he's gay, which she wasn't aware of. "I'm not ashamed of it or anything, but..." He shrugs. "High school."

A movie that leaves a choice like that to its gay characters—who are often used as plot devices rather than real characters—brings me to another point...

This movie is modern but not performatively “woke.”

Of course Hot Dad John Corbett is a doctor who's able to talk soberly about menstruation with his three young adult daughters. But my favorite is the sex talk he gives Lara Jean before she goes on an infamous school ski trip, in which he tells her that, as her dad, he thinks she’s too young to have sex, but it’s ultimately her decision and he wants her to be safe. He even gifts her some condoms, and she’s appropriately mortified. But still, that’s good dad-ing.

But this casual but not put-on social awareness really shines in the scene in which Lara Jean shows Peter Sixteen Candles, a movie she loves. At one point, Peter points out that the Asian character Long Duck Dong is “kinda racist.” “Oh it’s extremely racist,” Lara Jean tells him. “But that’s not why I love it.” (The reason is Jake Ryan, naturally.) It’s a funny way of tackling the issue of a character of Asian descent loving a film that's so famously problematic while also revealing the politics of this movie in a way that’s straightforward but not pushy.

The characters don’t look like shiny, 30-something movie high schoolers.

Can we just address something for a second? The main “high school” dude in The Kissing Booth is so attractive that, at a certain point, watching it as a 27-year-old woman, it felt kind of f—ed up. High schoolers just don’t look like that! (The actor who played him is 21, so they really don’t!)

But the high schoolers in To All The Boys I’ve Loved Before truly look like people I was friends with in high school. Yes, Lana Condor is gorgeous and the boys in her orbit are reliably cute, but it makes it a little easier to root for them when they sort of remind you of people you really know. Right?

It has realistic sibling relationships.

Without giving too much away, there’s a sex tape scandal involving Lara Jean and Peter at one point and Lara Jean, understandably, freaks out. Unfortunately, it happens right after Margot finds out about Lara Jean's infatuation with Josh throughout their entire relationship. Margot is pissed, but still jumps in to save Lara Jean's reputation and get the offending video taken off Instagram because that's just what you do for your family.

Same with how Lara Jean finds out that her youngest sister sent her love letters to their subjects (but, like, of course it was her?) and at first attempts to kill her, then decides she’ll forgive her if her sister braids her hair every day for a year. Most actual sibling relationships tend to go from forgiveness to ambivalence to appreciation and back again within the span of, like, a day. The fact that To All the Boys I’ve Loved Before doesn’t act too precious about them is so refreshing.

I think that's the best way to describe a lot about this movie: It's refreshing.

To All the Boys I’ve Loved Before is streaming on Netflix now.

Related Story
Lana Condor Raps Along to 'Hamilton' Too
This content is created and maintained by a third party, and imported onto this page to help users provide their email addresses. You may be able to find more information about this and similar content at piano.io
Advertisement - Continue Reading Below
More From Culture
Read an Excerpt From 'We Were Never Here'
How to Join Marie Claire's Virtual Book Club
Advertisement - Continue Reading Below
See Inside Julianna Margulies's Personal Library
Could 'Manifest' Come Back for a Fourth Season?
The Most Unmissable Movies of 2021 (So Far)
The Eternal Sunshine of Juno Temple
Let's Talk About That 'Virgin River' Cliffhanger
Zendaya Shared a Teaser of 'Euphoria' Season 2
'Ginny & Georgia' Season 2: Everything We Know
Wait, Where's Hope in 'Virgin River'?