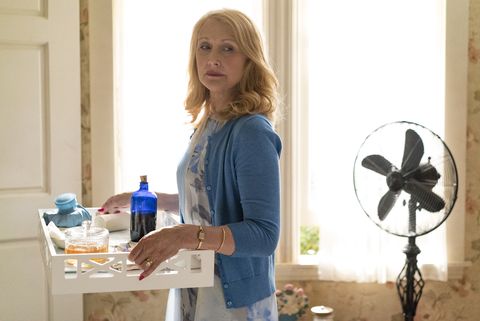 With the season (and possibly the series) of Sharp Objects wrapping up in the next week, we’re finally getting some answers. This week, we find out how Camille’s younger sister Marian died and, possibly, how she was connected to the other murdered girls; how the romance plot between Camille and Richard shakes out (not well!); and what might become of Amma.

Of course, this being Sharp Objects, the answers end up asking even bigger questions. But the show went from six slow-burning episodes in which we learn about Wind Gap and its denizens (and their strange virtues) to an episode of fast-and-furious plot development. It’s about time this show gives us something concrete to go on, instead of unreliable narration and twisting darkness. But beware: Spoilers abound.

Here are the biggest moments of the seventh (and second-to-last) episode:

Adora tries to care for Camille in the same way she babies Amma.

A deeply hungover Camille wakes up in her room with a nightgown on. “A little bit of sweet before the bitter,” Adora tells her, trying to feed her some unspecified medicine. Camille refuses, and Adora still tries to wrap her ankle but Camille insists she has to get to work.

Amma, though, does accept the medicine, and tells Camille that her favorite part of getting wasted is when Adora takes care of her. “Mama likes me like this,” she tells Camille. She looks weak and wounded. And now we know why...

We now know how Marian died, and it's horrific.

Adora is guilty as hell. Richard tracks down a nurse working in a methadone clinic—her reputation clearly disgraced, wonder by whom—who tells him that she kept Marian Crellin’s file because she was suspicious about how she died. The nurse tells her Marian was passed around from doctor to doctor, with various diagnoses.

She tells him, Munchausen by proxy (MBP) “is when you make someone else sick so you can care for them so you can save them, so you can try, so you can be seen trying.” Richard asks her if Adora has this, and she demures. “People have this,” says the nurse. “Mothers who need to be worshipped. Nothing more laudable than someone taking care of her sick child.” The nurse reveals that when she went to the police, she lost her job at the hospital. She tells Richard she still has friends at the hospital, if he wanted to hear from them about “the other one”—presumably Amma.

Okay, so we’re finding out that Adora possibly slowly murdered her own favorite daughter? Within the first ten minutes of the second-to-last episode? Something feels more complicated. It was easy to spot, especially in retrospect, that Adora favored the daughters who didn’t fight back, and who let her take care of them. Munchausen’s by proxy seems like a natural fit. It also explains why Camille, by not submitting, was shunned by her mother.

He checks out Amma’s records and finds that she had also been admitted to the hospital several times for similarly suspicious reasons.

Amma (finally) pushes back against her mother.

When Adora tries to give Amma more medicine, she admits that she’s not actually sick, just hungover. Adora tries to pin it on Camille, but Amma says she just needs sleep. Obviously, cue the guilt about how Amma doesn’t need her anymore—make a lot of sense in light of the MBP diagnosis. She eventually submits to the medicine again.

Later, Amma tries to text people behind her mom’s back. Adora takes her cell phone and gives her more medicine. It seems like Amma is aware that there’s something in the medication, but she takes it anyway, albeit reluctantly.

I gotta say, it’s kind of refreshing to actually get to root for Amma, who was so dark and spiteful throughout much of this season. You want her to get out of there and save herself and go be complicated.

Vickery and the cops go to Ashley’s house to find John and bring him in, after someone at the factory fingered him as Anne and Natalie’s murderer. He’s nowhere to be found and Ashley, at first, covers for him. But with a little coaxing and promises of having her face on TV, Vickery convinces her to give him up.

I feel like Sharp Objects did Ashley dirty by wrapping up her storyline like this. She did exactly what we expected her to do, when the tone of the show suggested up until this point that women—especially young women—could be strong and defy the expectations put on them. But Ashley, painted as fame-hungry and posturing from moment one, uh, didn’t.

Camille hooks up with John...

After tracking John down to a bar a few miles outside of town, she finds John. He’s preparing to get arrested, and makes a show about what he thinks the cops wanted to hear about how he killed his sister. Camille sees through it, and tells him that she knows he’s innocent.

He’s still very beaten up about Natalie’s death, in general. He and Camille joke, morbidly, about whether their dead sisters would have been friends. Then he tells her, “You’re beautiful. Sorry, it’s a compliment. Don’t get any ideas.”

They go to a hotel, where Camille actually takes her clothes off (remember, she stayed fully dressed every time she and Richard hooked up) and lets him touch her scars. It’s like she needed someone as wounded as she was to open up to. It’s why she could never take her clothes off for Richard, even when they slept together.

...and Richard walks in on them.

The cops find John at the hotel and Richard walks in to find Camille in there. John gets arrested, Richard confronts Camille, of course. She tries to make excuses and defend John’s innocence, but whether he actually believes her or is just pissed at John for their hookup, he tells her, “It’s always the fucking family, Camille.”

Who’s he referring to here, given everything he knows?

Turns out Jackie had been inquiring about Marian’s death to hospitals.

Richard, as a parting shot, left the files about her sisters on Camille’s passenger seat outside the hotel. Leafing through it, she finds a bunch of requests for toxicology reports and diagnoses for Marian, all submitted by Jackie. Camille goes to Jackie’s house, where Jackie offers her alcohol and pills, showing her the collection of illnesses she’d acquired. “Oh, and hypochondria,” she says. “I hurt.”

She asks Camille what she remembers about Marian’s funeral. “Goddamn Martha Stewart funeral,” says Jackie. “Your mother never looked more beautiful than that day. She cried and cried. And then she burned her.” She’s referring to Marian’s cremation, which Jackie apparently knew was to hide the evidence of abuse.

Suddenly it all dawns on Camille what her mother had been up to, that Adora had poisoned Marian and was doing the same thing to Amma. It also occurs to her that Jackie knew about the poisoning the entire time, even that Adora had tried to do it to Camille. “And you just let it happen?” asks Camille. “I did what I could,” says Jackie. Camille storms out angrily.

Camille tells her editor she’s going to do something about Adora.

She calls him, crying, and he tells her to get on a plane immediately. “My mother did it,” she keeps repeating, and then refuses to return. “She’s doing it again, and I need to take care of it,” Camille tells him before hanging up. This does, in some ways, confirm what Camille has always suspected: That the murderer was a woman. But even if it explains Marian’s death, it doesn’t totally account for the brutal deaths of Anne and Natalie. What would Adora have wanted by killing them?

Adora is The Woman in White.

In a quick vision as she’s driving home, Camille pictures again the old ghost story about The Woman in White beckoning a little girl into the woods, but this time it’s clearly Adora. This has, actually, felt a bit unfulfilling as a plot point up until now—you can’t just introduce a scary ghost and then not follow through—but it seems like if any more information had been given, it would have pointed to Adora almost too obviously. The Woman in White just sounds like her, you know?

Alan may be in on the whole poisoning plot.

Alan, who’s been super passive bordering on creepy throughout the entire season, seems to be not only aware of what’s been happening to the girls but distraught about it. That doesn’t make him less complicit, but it means that plenty of people didn’t step in no matter how terrible it was. It also explains, to some extent, the reason Adora would get close to Vickery to cover her own tracks. She’s powerful and manipulative.

The last scene of the episode is from Alan’s perspective. He pictures Amma dancing with him when she was younger, and listens to the creepy song “Down in the Willow Garden” by The Everly Brothers. (Read the lyrics—they're about murdering someone the narrator loves. A bit on-the-nose, to be honest.)

But really, if Alan knew what was going on this whole time, why didn’t he intervene? Is he a victim too, or an accomplice?

And who murdered the girls? Are we supposed to somehow assume Munchausen by proxy also makes her a cold-blooded killer? It seems like two separate impulses.

All I know is, with no plans for a second season of this show (in part because Amy Adams has said she doesn’t want to return to such dark material), there’s a lot of explaining to be done in the final episode of the season next week.

Related Stories
10 Biggest Moments From 'Sharp Objects' Episode 6
9 Biggest Moments From 'Sharp Objects' Episode 5
This content is created and maintained by a third party, and imported onto this page to help users provide their email addresses. You may be able to find more information about this and similar content at piano.io
Advertisement - Continue Reading Below
More From Culture
Pre-Order These Highly-Anticipated 2021 Books
The 25 Most Underrated Films Ever Made
Advertisement - Continue Reading Below
Were the Paintings in 'This Is a Robbery' Found?
'Bridgerton' Season 2: Everything We Know
New True Crime Books You'll Obsess Over
The 'Who Killed Sara?' Cast: Your Complete Guide
The 'Paradise City' Cast Plays Trivia
Sad Movies for When You Need a Good Cry
What Happens When Prince Philip Dies?
Photos of Prince Philip with His Grandchildren