Like it wasn’t already exciting enough that AHS legend Sarah Paulson is set to make her return to the messed up world of American Horror Story, everyone's fave is also now taking the reigns behind the camera, too. The Emmy winning actress has taken on a whole new role for the upcoming season 8 of the show, and it’s now confirmed that Paulson will direct the sixth episode in the new Apocalypse series.

As the only actress to appear in all eight seasons of American Horror Story (alongside Evan Peters as the only actor), Paulson has upgraded her role in Ryan Murphy’s terrifying FX saga and taken her rightful spot in the director’s seat, too. According to E!, she first revealed at the 2018 Television Critics Association press tour that she would be playing an extra part in the making of season 8, but the news was confirmed on Instagram just yesterday.

In a video shared by AHS7 alumni Leslie Grossman, Sarah can be seen looking very at home with her head mic on, as she calls “Action!” to the cast from her behind-the-scenes spot.

You know how this person is v v good at acting? Now add directing to the list ✅

Apocalypse is set to be one of the most exciting (and probably most nightmare-inducing) seasons of the show to date, with Paulson having previously confirmed that matriarch Jessica Lange would definitely be returning especially for her directed episode. Lange, who has been missing from American Horror Story since season 4, will reprise her Murder House role as Constance Langdon, as the new series acts as a crossover between Murder House and Coven. In fact, Paulson’s directorial debut is bringing out all of the big names, as photos from on set also confirmed that Connie Britton and Dylan McDermott will make an appearance, alongside Emma Roberts, Evan Peters and Taissa Farmiga, who’ve been confirmed as returning to the show to play their original characters.

Harmon spin-off? Back in the #MurderHouse 7 years later...with the great @mssarahcatharinepaulson directing no less!

According to her IMDb page, Sarah will portray an impressive three characters throughout Apocalypse as well as directing, appearing as Murder House’s Billie, Coven’s Cordelia, and a mysterious new character called Venable. 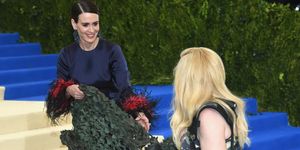