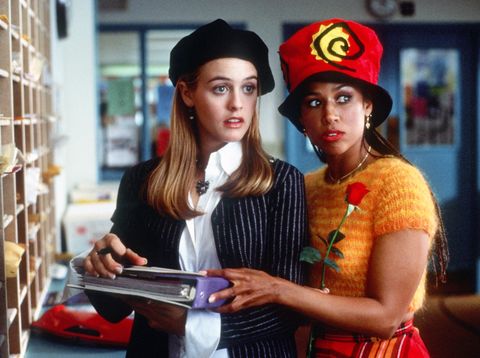 It seems like lately Hollywood has been living in a teenage dream. I don’t mean the jarringly good hordes of talent who are indefinitely waiting in the wings of the A24 casting offices, ready with an acceptance speech, should the occasion call for it. (Lookin' at you, Saoirse! You'll get that Oscar, girl!)

No, I mean that other tier of celebrity: Teens who have been creating conversation with their delightfully buzzy shows, movies, and Netflix projects—the fledgling stars who are always popping up when you refresh your Instagram feed. Hollywood is great for them right now, because while they won't necessarily get a permanent seat at The Hollywood Reporter roundtable, they get cast in the fun movies—the ones that turn into cult classics. And when you think of fun, cult-classic movies, you pretty much have to think of the iconic 1995 teen film Clueless. Like, is there a better movie? Period? As if.

In this week’s Recasted, let’s take the stars that launched a thousand stan accounts and see just where they’d fit in the glitzy, ditzy Beverly Hills of Cher Horowitz and friends. Who are you shipping and who would you take shopping?

Preeminent teen du jour Lili Reinhart is popping up everywhere these days, from magazine pages to award shows to the Following tab of every teenager’s Instagram. It seems that 2018 is the Reign of Reinhart and no one is complaining. Why shouldn’t it be? She’s talented, both onscreen and off: When she’s not starring as both Good and Dark Betty on Riverdale, she’s being incredibly relatable online. If there’s anyone who can conjure the goofy, earnest, Cali-girl-with-a-heart-of-gold vibe of Cher, it’s this millennial leader.

If we ever create time travel, can we go back and just replace Stacey Dash with Zendaya in the original? Zendaya is wise beyond her years, smart, and something tells me the chemistry she’ll have with Lili could replicate—nay, surpass—the magic that was Dionne and Cher’s friendship. Also, Stacey Dash is a vocal Trump supporter, which is just not the vibe! Sorry!

Perhaps best known for being the little girl in those Missy Elliott music videos (a personal goal of mine, TBH), Stoner’s reintroducing herself to the world slowly but surely. Her kid-at-heart persona is an essential for playing Tai, but her maturity and growth will help flesh out this character (almost) as wonderfully as Brittany Murphy did. Besides, after years of being out of the spotlight for a bit, she deserves the great Hollywood honor of getting to deliver the iconic line, “You're a virgin who can’t drive.” It’s the LEAST WE CAN DO FOR HER.

Nick Robinson is best known for his role at the titular Simon in Love, Simon, in which he stole everyone’s heart and increased the sale of Kleenex by roughly 5,000 percent. Robinson’s totally got the young Paul Rudd charm, and we’d be excited to watch him flex a more sarcastic muscle with this character. But, I mean, Paul Rudd could also completely play this role still, since he seems to lack the ability to age?

Troye Sivan is low-key serving us old-Hollywood talent: He can sing Top 40, act, and even dance. Sivan’s already coming in hot this year with his new album Bloom, so why not raise the temperature a few degrees by showing up in a new movie as well? Who knows, maybe he’ll even be able to dream up a fun original song that could go along with the movie. (Plus, wouldn’t it be refreshing to see a gay actor actually play a gay character for a change? What a concept, right?)

Related Story
Who Would You Put in a 'Titanic' Remake?
Related Story
Who Would You Cast in a 'First Wives Club' Remake?
This content is created and maintained by a third party, and imported onto this page to help users provide their email addresses. You may be able to find more information about this and similar content at piano.io
Advertisement - Continue Reading Below
More From Culture
Pre-Order These Highly-Anticipated 2021 Books
The 25 Most Underrated Films Ever Made
Advertisement - Continue Reading Below
Were the Paintings in 'This Is a Robbery' Found?
'Bridgerton' Season 2: Everything We Know
New True Crime Books You'll Obsess Over
The 'Who Killed Sara?' Cast: Your Complete Guide
The 'Paradise City' Cast Plays Trivia
Sad Movies for When You Need a Good Cry
What Happens When Prince Philip Dies?
Photos of Prince Philip with His Grandchildren