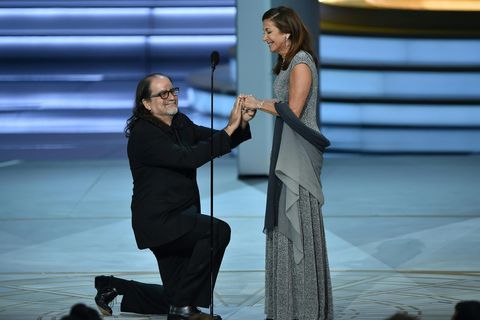 Glenn Weiss just won an Emmy award for Directing for a Variety Special for his work on the Oscars, but instead of a regular old acceptance speech, Weiss turned his onstage moment into an even bigger life moment, proposing to his girlfriend, Jan. Yes!

Cancel all other proposals, because if Leslie Jones is not present to make an IRL shocked emoji face for the moment when your prospective fiancé gets down on one knee, is it even worth it?

Weiss gave a very sweet speech thanking a few people in his life and mentioning that this was a bittersweet moment because his mother had just passed away. "Mom always believed in finding the sunshine in things, and she adored my girlfriend, Jan," he said. "Jan, you are the sunshine in my life, and mom was right, don't ever let go of your sunshine. You wonder why I don't ever like calling you my girlfriend? It's because I want to call you my wife."

To which Jan said:

And the audience went:

Basically, let's just end this award show now, and forever, because there's no way we're going to get a happier, more wonderful moment than this (also, Tiffany Haddish and Chrissy Teigen both already presented, so what else are we waiting for?).

Anyway, smooch the person or animal next to you and remember, in the words of Glenn Weiss, "don't ever let go of your sunshine."

Related Stories
The Best (and Weirdest) Moments from Emmys 2018
The Best Red Carpet Looks from the 2018 Emmys
Sally Holmes Digital Director Sally is the Digital Director of MarieClaire.com where she oversees coverage of all the things the Marie Claire reader wants to know about, including politics, beauty, fashion, celebs, and Prince Harry's facial hair.
Advertisement - Continue Reading Below
More From The Emmys 2020
What Everyone Wore to the Emmys After-Parties
Blake Paid Tribute to Leighton During the Emmys
Advertisement - Continue Reading Below
Patricia Arquette Makes a Plea for Trans Rights
The Emmys Were All About the Light Blue Dress
Twitter Is Obsessed with Zendaya's Emmys Dress
Alex Borstein Tells Women to "Step Out of Line'
What Emilia Wore to the Emmys
It's Valentine's Day on the Emmys Red Carpet
Gwendoline Christie Looks Like Jesus at the Emmys
Wait, Is Taylor Swift at the 2019 Emmys?