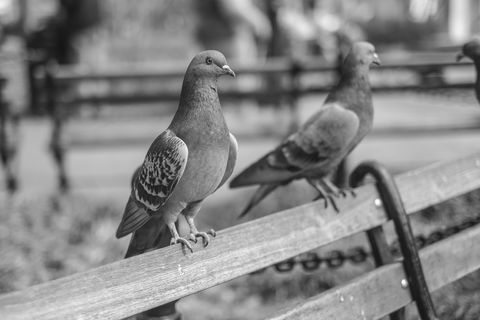 It’s Thanksgiving, which means you’re probably about to hear some terrible political opinions. As a refreshing palate-cleanser, every day this week the editors of Marie Claire will be sharing their most tightly-held unpopular opinions on a range of decidedly non-political subjects—in case you need something more interesting to fight about at dinner. See yesterday's here.

If you look for them, I have a sneaky feeling you'll find that pigeons, actually, are all around. Though they may be known as "rats with wings" to many a city-dweller, I'm a birdwatcher and one of my all-time favorite species, you may be surprised/bored to find out, is the Common Pigeon (the Rock Dove, if you're nasty).

This isn't just an ironically contrarian take, like volunteering to die on the "Pikachu is hot!" hill: Pigeons are a really impressive species with an heroic history and some downright humanish traits.

You see, there are nearly 300 million pigeons on Earth, and because they've figured out how to get along well with people (even though you're all talking shit about them behind their backs), there's a good chance if you live in a semi-populous place that there's a pigeon not far from where you're currently sitting. Maybe you should try to appreciate them once in awhile!

And so in defense of pigeons, I present to you the following list of reasons they are smart, adorable, brave, and wise.

(Please hit play on the below song as you read.)

War pigeons (!) have been used in a lot of major conflicts, but due to some inexplicably bad pigeon PR we've largely forgotten about their contributions. I want to illuminate a few notable moments in their service records real fast:

There are so many more examples (here are a bunch of them), but the point is that pigeons used to be seen as not just heroic but worthy of accolades! How many Italians have you saved?

There's this kind of funny rhetorical question that's become synonymous with city life: How come you never see a baby pigeon? There's actually a real answer to this question, because it turns out pigeon parents—like Kristen Bell and Dax Shepard before them—are not down for their babies getting unnecessary attention from strangers. Pigeons mate for life, and equally coparent their squabs (the correct but delicious-sounding name for baby pigeons) in their well-hidden nests until their young reach near-maturity. The pigeon parents only reveal their babies to the world once they practically look like adults, usually introducing them in the form of a People magazine cover shoot.

They can be super pretty.

The pigeon you're used to seeing is a rock dove (or common pigeon), and it's probably got a grey body and some sparkly purple or green neck feathers. Like so:

A fine pigeon, to be sure. But pigeons come in many shapes and sizes, and some of them are hella gorgeous. For example, look at this total dime, a Victoria crowned pigeon:

And did you know that these Jacobin pigeons were classmates at Yale and agree it was marvelous bumping into you at the charity luncheon last season?

Meanwhile, the Nicobar pigeon is like the iPhone X to your neighborhood pigeon's iPhone 6S:

Point is, birds in the greater pigeon family are some of the prettiest animals on earth and you get to see a member of that family almost daily. Lucky you!

They're surprisingly smart and they know what you've been saying about them.

Plenty of studies have been done to test pigeon intelligence, and the findings are wild. I don't have time to go into a lot of them right now, but if you're interested I recommend checking out the pigeon experiments of behaviorist B.F. Skinner (who, among other things, taught pigeons how to play ping-pong).

Instead, there's one experiment that I think really brings this whole pro-pigeon point on home. Pigeons are smart and not only remember the people who are nice to them—down to specific facial features—but also remember people who are mean to them. So that lady in the park who's always covered in pigeons and insists that they're her friends (a.k.a. me in a few years, probably!!) might be onto something.

In 2011, two researchers in Paris tested pigeon intelligence by going to a park square. One researcher fed the birds and the other chased them away. They repeated this for several days and fairly quickly the pigeons knew the feeder from the chaser—even when they swapped outfits—and would flock or run away accordingly. The study concludes: "The fact that the pigeons appeared to know that clothing colour was not a good way of telling humans apart suggests that the birds have developed abilities to discriminate between humans in particular."

They may have developed this ability over time, since they were the first-ever domesticated bird and have been hanging out with us—whether we want them to or not—for over 5,000 years.

In conclusion, pigeons are magnificent birds and worth celebrating. The next time you see a pigeon in your neighborhood, say hi. It'll remember you did.

This content is created and maintained by a third party, and imported onto this page to help users provide their email addresses. You may be able to find more information about this and similar content at piano.io
Advertisement - Continue Reading Below
More From Culture
Meet the Cast of 'Too Hot to Handle' Season 2
All About Carly From 'Too Hot to Handle'
Advertisement - Continue Reading Below
The Internet Reacts to Netflix's 'Sexy Beasts'
Watch the 'Kevin Can F Himself' Cast Play Trivia
Will There Be a Season 3 of 'Virgin River'?
Jessamyn Stanley Wants to Talk About All of It
'Bachelor In Paradise' 2021: Everything We Know
What Is Gunther From 'Friends' Doing Now, Anyways?
All the Deets on Michelle's 'Bachelorette' Season
'Life After Happy Face' Is Your Fave New Podcast