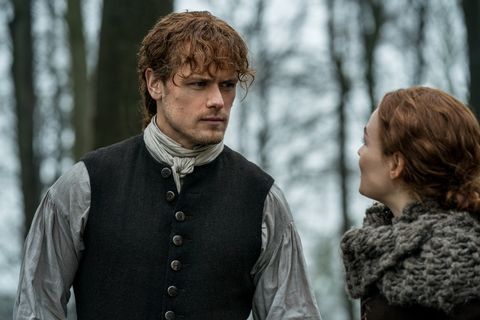 This episode is centered around Jamie and Claire Fraser’s daughter Brianna and her problematic pregnancy. In the last episode, when she told the Scots part of her family that her nickname was Bree, they all thought it was amusing because in Scots, a bree is a great disturbance. It turns out that she is–a wind storm boiling through Fraser’s Ridge and sweeping away the calm and peace of her family with it.

As the story begins, Jamie (Sam Heughan) has just come back from beating the hell out of a man he thought had raped Brianna. (It turns out instead to be her lover, Roger Mackenzie). He thinks he has protected his precious daughter who he is just getting to know. They walk together to check traps and Brianna (Sophie Skelton) breaks down and admits that she blames herself for being raped, that she should have fought harder against the man. Sensing that words alone will not convince her otherwise, Jamie baits her, suggesting that she wanted the sex and only after she became pregnant called it rape. When she goes after him furiously, he easily overpowers her, making her realize she could not have stopped the rapist either. But words do help when she asks him (to his shock) about his own rape at the hands of Black Jack Randall. “Did you fight back?” “I gave my word not to fight in exchange for your mother’s life. I would do the same again.” When he finally did kill Black Jack during the Battle of Culloden, which cost hundreds of Scots their lives, “vengeance didn’t seem so important then. You will not forget, but time will let you heal.” Sage fatherly advice. All good, right? Ummm…not so much.

Brianna and Jamie share another moment when they watch Claire working in her garden. “She seems at peace here,” Brianna tells him. “She’d grow roots there if she could, in her garden,” he responds. “My father [the dreaded Frank] used to joke that she would leave us and live alone in the woods. But she’s not alone.” But Claire’s peace of mind is totally cut up. She’s promised Brianna to keep her rapist’s identity a secret from Jamie. (He’s Stephen Bonnet the pirate who attacked and robbed them.) Knowing she is not good at hiding things from Jamie, Claire is anxious and distracted during a meal. Even the sight of her husband and daughter enjoying each other, does not get her to smile. She also presents Brianna with a difficult choice. As a doctor, she can perform an abortion if that is what Brianna wants. But the baby could possibly be Roger’s. And if she wants to keep the baby, Brianna would have to go back to the future right away, while she’s still pregnant. There is one lovely mother-daughter moment. As Brianna helps Claire with laundry, they remember the things they miss about the future. Hamburgers, peanut butter and jelly sandwiches, Led Zeppelin and above all, toilets. We can relate.

ROGER AND THE INDIANS

Roger, after getting his beating from Jamie, has been sold to a group of Indians by young Ian, Jamie’s nephew. He’s on a sort of forced march, tied to the saddle of the Indian’s horse, on his way to God knows where. There are a lot of long shots of Roger walking, Indians riding, and trees. It’s apparently a long, long way. Roger eventually escapes after falling down a hill. During his mad run for freedom, he comes across a startling sight: a standing stone, just like the one in Scotland that is a portal in time. He’s right there, he can go back to his own time. What will he do?

Here’s the thing: busy bodies are good at poking into people’s business and very bad at keeping secrets. Take Brianna’s maid, Lizzie. She’s the one who told Jamie that Roger had raped Brianna and started the whole mess. When Brianna has a nightmare, Lizzie comforts her by saying the man cannot hurt her now. She spills the whole story and Brianna is furious. She confronts Jamie and Ian about Roger. Now Jamie is furious. “You said he raped you. I was defending your honor. I nearly killed the man.” When Brianna tells him she was raped by another man, Jamie promises “I’ll make it right. You have my word as your father.” Viciously, Brianna responds, “My father would never have said the things you said to me. You are nothing but a savage.” It gets worse. Ian asks who did attack her and Claire takes out the wedding ring that Bonnet stole from her months before. Jamie is gutted. He had helped Bonnet escape the law, only to be betrayed by him twice. And Claire has kept this secret from him. Meanwhile, Brianna not only slaps Jamie across the face but also Ian when he tells her he sold Roger to the Mohawk. Claire looks like she’s going to throw up through the whole scene. Everyone feels guilty here. But really, it’s all Lizzie’s fault. And Brianna is kind of a brat.

PARTING OF THE WAYS

The once happy family breaks up, at least temporarily. Brianna forces Claire to go with Jamie and Ian to find Roger. She doesn’t trust them. Murtagh offers to take Brianna and Lizzie (really, it’s all her fault) to stay with Aunt Jocasta at her lavish plantation, River Run. Jamie and Claire are hardly speaking. Claire is torn between her love for her husband and her daughter, feeling that she betrayed them both. Jamie knows he screwed up and promises “I will find him lass. I will not return until I do.” The only good news is the hint of some kind of possible romance between Murtagh and Jocasta who knew each other long ago.