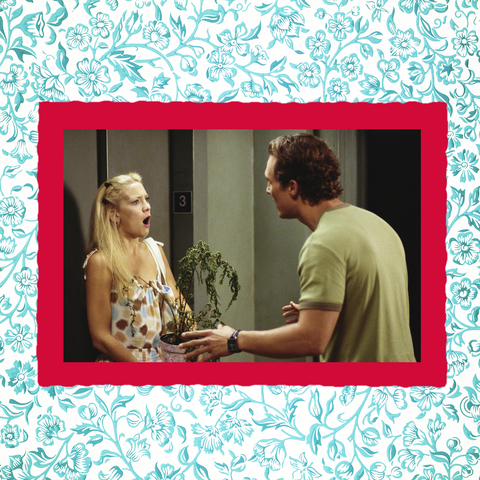 The premise of How to Lose A Guy In 10 Days is truly one of the more LOL of romantic comedies. The protagonist, Miss Queen Royal Highness Kate Hudson, works for a magazine writing How To articles—but wants more from her work. She’s unfortunately tasked with writing about how to lose a guy in 10 days (which honestly doesn't seem that hard considering I could devote an entire daily column to how I lose guys in 10 minutes). Sure, that sounds-ish like an article that could maybe exist in the world? Here’s where it gets weird, though: Matthew McConaughey’s character is tasked with making a woman fall in love with him in ten days in order to win a bet which would land him(an ad guy) a diamond account. (Honestly, if this movie was released now, it would be over in 10 minutes with a cameo from Ariana Grande buying seven of each kind of diamond he’s trying to sell.)

Thinking about how this film birthed the romantic comedy career of Hudson and added fuel to the already burning rom-com fire of McConaughey, I couldn't help but wonder (as writers who grew up watching Sex and the City are prone to do): Where would we find the next wave of rom-com stars? And then I immediately checked Instagram because it’s been three seconds since the last time I opened the app and realized: yes. Love it or hate it, the next batch of RCS (Romantic Comedy Stars) will be found on Insta — but luckily for us, there are some insanely talented people on there to make it worth it.

You guys, it’s Chloe. I’m not sure how I first found her on Instagram — but discovering her amazing videos was like the first time I had an almond croissant: WAIT THIS IS SO GOOD AND HOW HAS IT NOT BEEN IN MY LIFE SINCE DAY ONE?! She’s done impressions of Busy Philipps (who’s also a fan!), Greta Gerwig, Gigi Hadid, and countless others. But now, instead of impersonating these famous actresses, it’s time for Chloe to become a famous actress of her own—and what better way to start that off than stepping into a pair of Fabletics leggings and taking over for Hudson?

If you’ve seen Matt Rogers live, you probably felt like you were already in the beginning of your personal romantic comedy. Not only does he have a smile that immediately makes you fall in love, but the minute he opens his mouth you’re also hooked and laughing and demanding more. He seems like he’s created by Hollywood to be a leading man—and I’m sure his devoted Las Culturistas podcast listeners wholeheartedly agree. Whether he and Chloe want to honor this film as is or maybe they can fight to try and lose the same guy in 10 days is up to them and whoever else makes movie decisions (I email support@lionsgate a lot to little or no avail).

I’m not someone who takes Instagram Stories lightly. Ask any Uber driver I’ve ever had, and they’ll tell you that most often I’m simultaneously inhaling fries and shouting at a front-facing camera (pray for my rating). Heather has the Busy Philipps-level stories that you need to watch in a quiet room, sound blasting, so you don’t miss anything. Her characters are amazing, but her hysterical streams of thought show she’s just naturally born to make you die laughing. Not only is she perfect to fill in for Kathryn Hahn in this role, but I'm also putting itout into the universe that they need to be in a mother/daughter movie ASAP. (Side note, I may demand Heather to do this role dressed as Kris Jenner).

I realized I hadn't truly lived until I watched Julia’s parody of it as Ariana Grande. Not only do I think these two were somehow separated at birth, but Finkelstein’s delivery and glamorous vibes make her perfect to play the part of Andie’s work pal. Maybe in 2019 though, women character’s came have last names? — yeah.

More Rom-Com Coverage, Right This Way
Heather Burns on Miss Rhode Island's Happy Ending
Where Are Our Queer Rom-Coms?
Why 'Valentine's Day' Is the Worst Rom-Com
Danny Murphy Culture & Social Editor Danny is the cultural and social editor for BestProducts.com where he's been covering crazy trends, celebrities, and anything else insane since 2016; He has also contributed to Marie Claire, Delish, and Medium. When he's not looking for the next viral sensation online, you can find him watching Bravo, drinking a third cold brew, or trying to convince people to go to karaoke.
This content is created and maintained by a third party, and imported onto this page to help users provide their email addresses. You may be able to find more information about this and similar content at piano.io
Advertisement - Continue Reading Below
More From Culture
Who Plays Townes in 'The Queen's Gambit'?
The Best Korean Dramas to Get You Hooked
Advertisement - Continue Reading Below
To Save Victims, We Must Dismantle Purity Culture
Will There Be a Season 2 of 'The Queen's Gambit'?
Who Is Zach J. on 'The Bachelorette'?
A Classic Horror Bucket List for Scary Movie Buffs
'The Queen's Gambit': All About Those Green Pills
This Is the New 'Bachelorette' Villain
Dale Moss Is a Super Important 'Bachelorette' Star
It's Been a Weird Year for 'The Bachelorette'