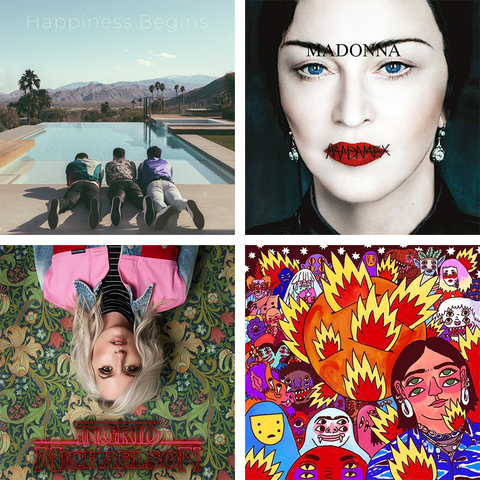 Welcome to Sound On, where we’ll highlight the albums and songs that you should know about each month—from the hits that landed to the tracks you might have missed. We’ll even tell you which moods each album evokes, so you know just when to turn them on to maximize their effects. Happy listening.

I don’t know about you, but I find that my music needs change during the summer. In the fall I want something introspective, in the winter, something quiet, and in the spring I yearn for something hopeful. But in the summer, we’re looking for music that’s surprising, carefree, and perfect for being played on the beach or at a rooftop party. There’s a reason the Song of the Summer is a thing: This is peak earworm season.

With that in mind, here are four albums that came out in June, just in time to kick summer off right. See if you agree:

JoBros! The very married, perennially adorable trio is back!

As a late Jonas Brothers adopter, I find that excavating through their discography—including solo outings—is like a geological survey. The bottom layer is sickeningly sweet Disney jams and purity rings, the middle reveals an era when they tried very hard to make sure we’re aware they’ve had sex now and know all about it, just ask them! And the top layer, in which we find Happiness Begins, takes the best parts of both and removes the weight of proving anything off of it. They’re here to have fun finally, in a cheeky but un-self-conscious (“Cool”) and painfully catchy (“Rollercoaster”) way. I love this side of them. This is what I want from a summer album.

Driving down the freeway with your friends at night; Karaoke.

Are you serious? Effin’ Madonna.

Anytime the Queen of Pop does anything, it warrants paying attention. She’s a journeywoman. She invented this shit. Madame X is an experimental, heavily Latin-influenced record that’s worth visiting. “Medellin” (video below) is an ominously sparse opening track that nevertheless demands your attention. (And that pill she references in the beginning is probably Ambien rather than anything someone is doing in Ibiza; Madonna’s been around the block too many times for such childishness.)

There are also some interesting guest choices, including Quavo (sans Migos) on dancey “Future” and Swae Lee (sans Slim Jxmmi) on midtempo but nevertheless catchy “Crave.” It’s not like anything she’s done before, for better (“Crave”) or worse (the graphic, inexplicably-included mass shooting imagery of the “God Control” video). “Crazy” is a slinking anthem, though it might be accused of landing a bit on the nose in this era of “Hispandering.” There are other brilliant pop moments, and a few truly bizarre ones. But it’s Madonna—she does what she wants and may or may not care what we think.

Before praying at your Madonna shrine, I would assume.

A 19-year-old New Zealand singer-songwriter who is your first one-to-watch of summer.

For her debut EP, BENEE gives us 20 minutes of swaying, R&B-inflected pop. It’s hooky and sticky, and BENEE’s voice is husky and playful. I mean, she sounds like Billie Eilish but with a wise-beyond-her-years production that I could listen to on repeat. “Soaked” is the track that first brought her attention, and for good reason, but I think at the moment I’m more attached to “Evil Spider.” That’s subject to change, though: This is one of those records that attaches me to a different song each listen.

While avoiding the heat by lying on the couch under a fan; tanning on your roof (wear sunscreen, bbs!)

Stranger Songs is an album based on the vibe and occasionally the storylines of the universally binged Netflix show Stranger Things (in case that album art looked familiar to you). As a result, Michaelson is deploying some moody synths—nothing as intense as jarring as S U R V I V E, the band that actually wrote the Stranger Things theme song—and some deliciously '80s beats. I’m getting strong Carly Rae Jepsen’s Emotion vibes here, which is the best compliment I can pay anything. To be totally fair, Stranger Songs is a little cheesier than that, but it’s a fitting tribute to a show that whips genuine feeling out of campy '80s sci-fi tropes. I like “Best Friend” and “Pretty” (which is giving me T-Swift vibes, tbh!), but there’s much to explore here.

When you’re trying to get pumped up for Stranger Things season three, of course! Which, by the way, premieres 4th of July weekend.

More Albums We Love
Sound On: The Best Albums That Came Out in May
Sound On: The 5 Best Albums We Heard in April
Advertisement - Continue Reading Below
More From Culture
87 Movies Everybody Should Watch At Least Once
The Best Documentaries on Amazon Prime Right Now
Advertisement - Continue Reading Below
Heart-Pumping Action Movies Coming Out This Year
The Best TV Shows on Hulu Right Now
The Documentaries You Can't Afford to Miss in 2020
'Killing Eve' Season 3 Review: What's Old Is New
A Super Pink Moon is Coming April 7
Pre-Order These Amazing Books Coming Out in 2020
The 8 Best Rom-Coms of 2020
Got 10 Minutes? Here's What to Watch on Quibi