Gilmore Girls fans around the world are shook: Kirk has finally found his soulmate. On June 15, Sean Gunn, the actor who plays Stars Hollow's oddball resident, Kirk, got married. According to People, Penn married actress Natasha Halevi on Southern California’s Catalina Island. The dress code for the wedding? "‘1920s disco ball goes to the beach,’ which basically meant: be fun, be fabulous, be colorful, be shiny, be awesome. We wanted to get rid of the fear of outshining anyone — and our friends definitely brought it," Halevi told People. Looks like some of Kirk's quirks were kept intact.

Gunn posted this adorable photo to Instagram with the caption: "Oh hey, I got married you guys."

He followed up with a very sweet individual post to thank his now-wife. "I have about a zillion wedding photos and a zillion and one people to thank and I’ll get to them all in due time, but I’m going to start by thanking my wife @tashalitas, who is a force of nature and made it all happen the way it all happened. Thanks, Lefty," Gunn wrote.

According to People, celebrity guests included Judy Greer, who was in the wedding party, Jennifer Holland, and Jenna Fisher. Didn't get your invite? Don't worry. It doesn't appear many of the Gilmore Girls cast attended either. However, there was some representation from the show's creator Amy Sherman-Palladino, also know for The Marvelous Mrs. Maisel, and Keico Agena, who played Lane Kim. Agena posted a photo of herself with Palladino on Instagram.

Don't feel bad if you didn't make the invite list! Ms. Patty will probably be on her fourth husband pretty soon. 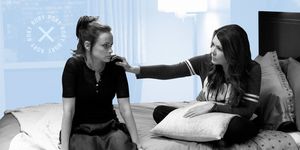 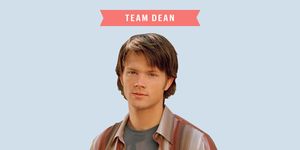 Unpopular Opinion: The Case for Dean
Alexis Jones Assistant Editor Alexis Jones is an assistant editor at Women's Health where she writes across several verticals on WomensHealthmag.com, including life, health, sex and love, relationships and fitness, while also contributing to the print magazine.
This content is created and maintained by a third party, and imported onto this page to help users provide their email addresses. You may be able to find more information about this and similar content at piano.io
Advertisement - Continue Reading Below
More From Culture
Queen of the Screen
The 12 Sexiest LGBTQ+ Movies Around
Advertisement - Continue Reading Below
53 Wild and Completely Iconic Vintage Porn Films
Dale Moss Is a Super Important 'Bachelorette' Star
It's Been a Weird Year for 'The Bachelorette'
Political Books to Read Ahead of Election Day
The Sexiest Movies on Amazon Prime
HBO Is Giving Fans 2 Special 'Euphoria' Episodes
What to Know About Tayshia's 'Bachelorette' Cast
Clare Crawley's 'Bachelorette' Cast Is Out