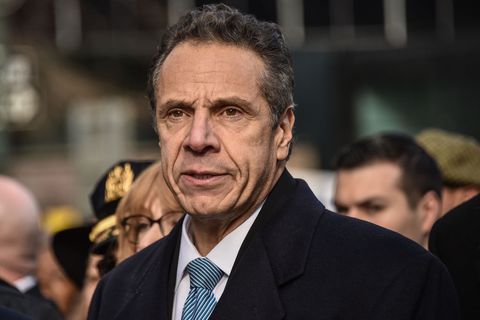 I was eating ice cold Tostitos cheese with a spoon at my desk on a recent Monday morning, gearing up to wrangle my inbox and not open the shades for the 9th day of quarantine in a row, when my phone started buzzing:

It was an emergency: My boyfriend, New York Governor Andrew Cuomo, I learned, had a new girlfriend.

Vital New York Times’ think pieces aside, life in Corona lockdown has been pretty innocuous for me so far. I have no children, no pets, just lots of beautiful things from HomeGoods and the outlets packed into a not-unspacious apartment on New York’s Upper West Side. I’m able to work from home sans bra, artfully tucking my breasts into my armpits while replying to work emails, and thankfully putting pants on to host my morning radio show on SiriusXM from my living room, a show my neighbors have called “Can you please close your windows?” and “Seriously, we have a newborn.”

But the one thing I do have to look forward to every day like clockwork has been New York Governor Andrew Cuomo’s daily press briefings at 11 a.m. (Sometimes he’s late, and starts them at 11:30. I’ve started referring to this waiting time as “Cuomo FOMO.”) Like a velveteen gravity blanket for my soul, the second I see this man’s perfectly weathered face and tousled curls, the moment his Pacino-like accent fills my living room with its mafia-like authority, my blood pressure drops, my breasts seem to perk up on their own, and a tingly feeling of optimism washes over my imprisoned body as I think to myself… I think we’re gonna be okay.

Andrew Cuomo, 62 years old, Sagittarius, divorced, recently single after his tabloid break-up with Sandra Lee, a father, dog owner, and brother of the arguably (much) hotter CNN anchor Chris Cuomo. Let’s talk about Chris for a second. When I say “Hot Cuomo” you say “Chris.” And I get it: Chris is an Adonis. I met Chris at the SiriusXM offices once where he also has a show (prayingHRdoesntreadthis) and his giant, manly presence was so great that my lips automatically tucked into my gums as I averted my eyes and jumped down an open elevator shaft. Marvel at this vintage photo of Andrew, Chris, and dad Mario in the middle:

Ummm okayyyy Chris Cuomo. The nerve of that body!! Those washboard abs! As someone who is neither stupid nor blind, I get it. But I’m gonna go ahead and state the obvious: Chris it too hot. Do you think I want a man carved from Carrara marble laying his eyes on my post-quarantine physique? I don’t want the “Hot” Cuomo, and not only because he’s happily married with a beautiful family, but because the only washboard *I’ll* be needing will be the one I have to use to wash my sheets in the Hudson after all the laundromats have closed down. News I’m sure I’ll get from my Governor… my Hot Cuomo… Mr. Andrew Cuomo.

Andrew’s morning briefings are literally all I have to look forward to. Unlike President Trump’s briefings, which may as well just be stock footage of Toonces driving this country over the edge of a mountain, Gov. Cuomo addresses his constituents with respect, grace, sensitivity, and a firmness which I sometimes DVR and watch again at 2 a.m. when, as the great Britney Spears once sang, my loneliness is killing me. Slow down when you’re reading me those daddy-joke laden Powerpoint slides babe.

Uch his Powerpoints!! Nothing puts me at ease quite as much as watching Gov. Cuomies sternly explain to us how f*cked we are. It honestly makes this impending societal and financial collapse a little more manageable.

I’ll pause here to say that the Coronavirus Pandemic is one of the scariest things we’ve ever lived through: the uncertainty, the waiting, hearing of more and more people losing their lives as our broken system of a government fails to provide equipment to hospitals, masks, gowns, ventilators, proper testing, and truthful messaging about the severity of this ravaging virus. I live in Manhattan and the only sounds I hear through my windows are those of ambulances a few times an hour. It’s scary and no one really knows what lies ahead.

But as a New Yorker at the epicenter of the outbreak here in the United States, it does give me a glimmer of hope that we’ve got a Cuomo at the helm. And the fact that he looks like Lumière as Tony Soprano doesn’t hurt either…

P.S. has anyone else noticed how nice his hands are? *police knock on door, serve restraining order*

I’ve been very open about my crush on Gov. Cuomo from the beginning, to which some have likened to Stockholm Syndrome. Trapped in my apartment, nowhere else to focus my hormones, the only man speaking directly TO ME for miles around. And apparently, I’m not alone! Because I’ve noticed a LOT of women are coming for my man! The Cuomo thirst is hitting desert-like peaks on Twitter and the Gram, women practically throwing themselves at the man. Ladies, slow your roll. First of all, he likes blondes. His first wife, a KENNEDY? Blonde. Sandra Lee? Famed cocktail maker? Blonde. That already eliminates about half of you. And in related news:

So yes, the word is out: Now EVERYONE has a crush on my boyfriend Governor Andrew Cuomo. But I’m not threatened. Because despite the fact that I’m eating Cinnamon Toast Crunch for three out of my five meals every day, I know I’ll be leaving this apartment in many weeks to months with a new zest for life that any man will find irresistible. So Gov., if you’re interested, Powerpoint slide into my DMs and let’s make it official.

Michelle Collins is a comedian and host of The Michelle Collins Show on SiriusXM Stars daily from 7-10AM ET. You can follow her Cuomo thirst on Twitter & Instagram @michcoll.

Advertisement - Continue Reading Below
More From Culture
The 8 Best Rom-Coms of 2020
The Perfect Situation to Watch Any Quibi Show
Advertisement - Continue Reading Below
We Could Be Getting More 'Tiger King'
HBO Is Making Iconic Shows & Movies Free to Watch
Tim Gunn & Heidi Klum Also Wear PJs to WFH
'Parasite' Is (Finally!) Coming to Hulu
The Best Teen Movies of 2020
Family Movies Both Grown-Ups and Kids Will Love
The Best Wedding Movies of All Time
Read 'Anna K' Even If You Didn't Read the Original