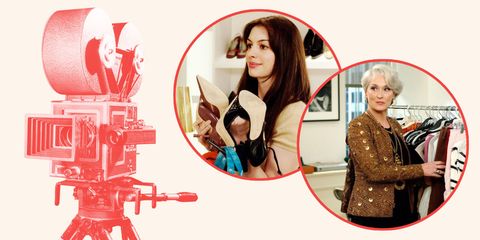 It's been 11 years since the premiere of The Devil Wears Prada and fans are still finding opportunities to recite the iconic quotes any chance they get. ("Florals? For spring? Groundbreaking.") But do you know what went into the iconic movie? Here, 50 things you never knew about the making of the film. That is all.

The movie is based on a book written by Lauren Weisberger, the former assistant to the editor-in-chief of Vogue, Anna Wintour.

2 of 50
Studios Fought Over the Rights to the Book

Before the book even hit the shelves in 2003, many studios were fighting over the rights to turn it into a film. They only had 100 pages to go off of, but were confident in the book's premise. Fox's former president, Carla Hacken, told Variety, "I was the first person to read it at Fox 2000. I thought Miranda Priestly was one of the greatest villains ever. I remember we aggressively went in and scooped it up."

However, after the book was published, they started over in order incorporate key details they missed.

At first they tried to adapt the film straight from the book, going through four writers trying to do so. Then they realized they needed to manipulate the story for film. "If you study the book," said Carla Hacken, "There is not a strong narrative that propels the plot forward. That required quite a bit of invention and trial and error. And since there wasn't a strong third act in the book, we needed to invent that."

"It seemed undirectable to me," said Frankel. "It was a satire rather than a love story."

6 of 50
Frankel Wasn't Satisfied with the Plot

"Miranda was a witch, and Andy's motivation was to get her revenge," said Frankel. "There was a lot of conflict that ended with Miranda being humiliated. I felt that wasn't satisfying. My view was that we should be grateful for excellence. Why do the excellent people have to be nice?"

7 of 50
As a Result, They Decided to Write a New Script

Rather than emulate the theme of the book, the writers decided that the film's theme would be about everything women needed to forfeit in order to achieve success at a fashion magazine.

The crew went through hundreds of twins before they found the right pair for the roles.

She was mentioned in the book for giving Miranda a Christmas present.

Gisele would act in the film as long as her character was not a model.

Lennon had to turn down the role due to conflicts with filming Reno 911.

For months, the team struggled to find an actor fit to play Nigel. At the very last minute, they came across Tucci. He was on set playing Nigel only seventy-two hours after his audition.

The production team apparently felt she wasn't fit to play the part.

The crew decided that Lewis wasn't quite right for the role.

Sykes is now a writer and was a former assistant to Anna Wintour.

Emily was in Los Angeles auditioning for Eragon when Prada auditions were taking place. At the last minute, her agent put her on a tape for Prada. She flew home thinking all of her auditions were unsuccessful. But Frankel loved her, and called her house to offer her the part. Her mom picked up and said she was out at a bar (she was upset about the audition). "I was in some dive club in London," Blunt said. "I called him back from the bathroom. He said, 'Listen I would have cast you off the tape, but the studio wants to see you one more time. Can you do what you did but dress the part more?'"

They dreamed of having Meryl Streep, but didn't think it would actually happen. "We had talked about Meryl a little bit, but I dare not allow myself to dream," said writer, Aline Brosh McKenna.

"The offer was to my mind slightly, if not insulting, not perhaps reflective of my actual value to the project," said Streep. "There was my 'goodbye moment,' and then they doubled the offer. I was 55, and I had just learned, at a very late date, how to deal on my own behalf."

19 of 50
Before this Role, Anne Hathaway Had Only Starred in Children's Films

Prior to The Devil Wears Prada, Anne starred in Ella Enchanted and The Princess Diaries. This role helped to shift the direction of her career.

20 of 50
The Team Wanted Rachel McAdams to Play Andy

Following her major success in The Notebook and Mean Girls, the team pushed hard for McAdams. She turned them down, saying that she wanted to take a break from mainstream material.

Right after her meeting with the Executive Vice President of Fox, Anne wrote the words in the sand of a zen garden to express her passion for the role.

Getty Images
22 of 50
To Prepare for the Role, Anne Volunteered as an Assistant

Anne felt that she need real experience as an assistant to get into character. She volunteered at an auction house.

Remember the montage of Miranda slamming her coats down on Andy's desk? "It was a hard day for Meryl," Blunt recalls. "There were probably 30 takes where either her arm got stuck or the coat didn't hit the desk at the right time. That was one of the funniest things I'd ever seen."

25 of 50
Shooting in New York Was Extremely Challenging

Given their very tight budget, the production team couldn't get permission to film at the MoMa or Bryant Park, which were integral locations to the script.

The front of the Elias-Clarke building (the home of the magazine in the film) was filmed at the McGraw-Hill building in Manhattan.

Ultimately, the townhouse that was used as Miranda's home belonged to a friend of the producer.

In a moment of true desperation, the directors and producers sent Fox a sizzle reel to convince them to fund the trip. Thankfully, it was met with a positive response, and they were able to fly to Paris.

While Anne Hathaway and Simon Baker flew out to Paris, Fox thought it would be too expensive to fly Streep out. Instead, her "Paris" scenes were filmed in the U.S.

Patricia Field designed all the outfits and all the pieces came from major designers.

Next
50 Things You Never Knew About 'Grey's Anatomy' 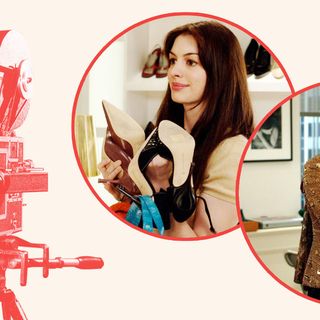