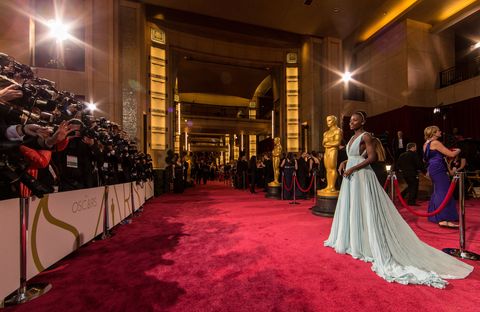 One moment, please. We have to collect ourselves as we mentally prepare to witness all the magic to come at the 87th Academy Awards—or, as we humble folk call it, THE OSCARS. No offense (okay, some) to the sister awards shows—Grammys, Golden Globes—but the Oscars bring about a je ne said quoi specialness that's just...happy, lively, even euphoric.

So what's in store for this year?

Neil Patrick Harris Keeping Us Awake for the Entire Show

"It's going to be an amazing show. Anything can happen." ANYTHING.

Adam Levine Performing an Oscar-Nominated Song for the First Time

The Maroon 5 frontman will be performing "Lost Song"—nominated for Best Original Song—from Begin Again. In other news, any #OOTD ideas for him?

Oscar ready...too over the top?

I'm performing live at the OSCARS this year! 💫 http://t.co/qCPLBUHL58

We have no idea what yet, but Oscars producer Craig Zadan tweeted that it will be a "very special performance."

SEE! We told you the Oscars were special! So meta.

Will it be taken on a Samsung again? Seems like the perfect product placement for the iPhone 6 Plus *wink wink* Apple.

Update 2/20: Dove and Twitter Will Speak Out Against Judging Appearances

Last year, there were over 5 million negative tweets about beauty and body image. As celebrities hit the red carpet, Dove will air a commercial promoting #SpeakBeautiful—a movement to stop this kind of speech once and for all.

Update 2/22: Lady Gaga's Performing a Tribute to the Sound of Music

Everyone please shut up during this performance. Please and thank you.

Tune in to ABC on February 22 at 7 p.m. EST to watch everything go down live (and hang out with us here for our coverage of everything that matters). In the meantime, start placing bets on all the nominees. Our money's on any film featuring a British accent.

The Most Spectacular Moments from the 2014 Oscars

Jennifer Aniston Says She's the "Number-One Snubbed" at the Oscars

The Best Quotes From The 2014 Oscars

Kenny Thapoung Social Media Editor When I'm not stalking future-but-never-going-to-happen husbands on Facebook, you can catch me eating at one of NYC's B-rated or below dining establishments—A-rated restaurants are for basics.
Advertisement - Continue Reading Below
More From The Oscars 2020
See Adele's Perfect Oscars After-Party Look
Emrata Wore the Most Emrata Outfit to Oscar Party
Advertisement - Continue Reading Below
J.Lo Outshone Everyone at the After Parties
Please Look at These Brad and Regina Photos
Chrissy Wore a Mint Dress With a High Slit
Jennifer Aniston Saved Her Best LBD for Last
Did You Spot Charlize Theron's Hidden Hair Detail?
Billie Eilish's Reactions Made the Oscars
Timmy Photobombed Margot on the Oscars Red Carpet
Elizabeth Banks Rewore Her 2004 Oscars Dress