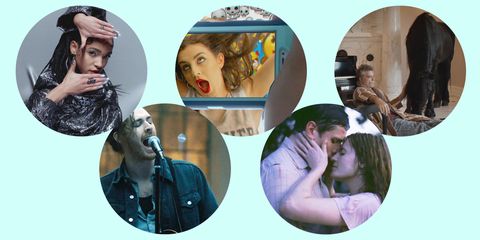 In our minds, the music industry was simply colluding to make the beginning of the week more tolerable by unveiling a slew of new music videos to give us all the feels. In actuality, it was a gesture by way of the YouTube Music Awards, who instead of hosting a traditional show, debuted 13 new music videos simultaneously.

Artists including FKA Twigs, Charli XCX, Florence + The Machine, Ed Sheeran, and Hozier have blessed our eyes and ears with their latest offerings and no matter how many flagged e-mails you have sitting in your inbox, you must pause for some divine musical therapy from our five favorites.

We hope you've had your morning coffee, because the avant R&B goddess is serving up serious psychedelics in her self-directed video. "Glass & Patron," co-produced by Boots and featured in the Google Glass ad, soundtracks Twigs quite literally giving birth to her dancers, then hosting a vogue battle of epic proportions—during which the singer shows off her professional dance skills.

The video, directed by Eric Wareheim of Adult Swim's Tim and Eric Awesome Show, underlines that the internet is a dark place by showing a young Charli watching herself on a smartphone. All's good and well until it starts to run out of battery (our secondhand panic is real). She tries to the plug the phone into the belly of a large man, but sadly dies a terrible digital-age death with emojis bleeding out of her heart. As one does, you know?

3. St. Jude by Florence + The Machine

The song, "St.Jude," is from the forthcoming How Big How Blue How Beautiful and is a sequel to the narrative of her first video release for the film. "It's obviously about relationships, but it's also about Florence traveling through our version of the Divine Comedy," Haycock said in a press release. It's dark, cold, and decidedly beautiful.

The Irish singer-songwriter has done it again and by that we mean brought one of his stunning songs to life with dance. The video, set ever-so-fittingly in a church, finds Hozier performing the heart-pounding number amidst a dance floor full of couples performing their own interpretive dance.

As his video "Thinking Out Loud," proved, it's awesome when Sheeran stars in his own music video. However, we're kind of freaking out over the fact that he tapped Goodfellas star Ray Liotta to star as a washed-up, hair-metal singer from the fictional band Black Glove. It's just the latest reminder that sex, drugs, and rock 'n' roll aren't *everything* they're cracked up to be.

The 30 Best Songs We Heard at SXSW

Lauren Valenti Associate Web Editor I’m the associate web editor at Marie Claire.
Advertisement - Continue Reading Below
More From Culture
Who Will Be on 'Bachelor in Paradise' in 2020?
When Will 'The Bachelor' Women Tell All Air?
Advertisement - Continue Reading Below
'The Bachelor' Has Already Finished His Season
The 83 Very Best Rom-Coms of All Time, Ranked
An Investigation Into the Next 'Bachelorette'
The Best Korean Dramas to Get You Hooked
Who Is 'Bachelor' Contestant Victoria Fuller?
Everything to Know About Peter Weber's Ex
Read an Excerpt From the Uber Whistleblower's Book
The Must-Watch TV Shows of 2020