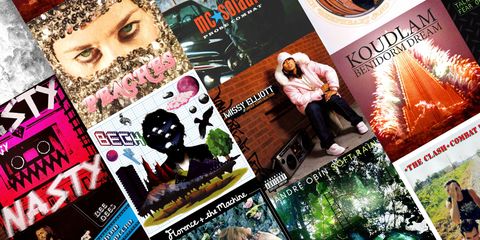 As New York Fashion Week comes to a close, we're reliving every last strut with the tracks that kept the catwalk in motion. Get schooled on the top 10 songs of the week and listen to our official NYFW Fall 2015 playlist on Spotify, which includes every single number that made our sartorial hearts sing.
1. "Earned It (Fifty Shades of Grey Theme)" by The Weeknd at Diane Von Furstenberg
DVF always has her finger on the pulse of pop culture and opted to open her show with the Fifty Shades of Grey theme song. The sexually-charged track gave the runway the seductive spirit of Studio 54 in the '70s.

3. "Lemonade" by Sophie at Jeremy Scott

Putting on a characteristically high-octane show, Scott had fun with two childhood novelties: dolls and nursery rhymes. His cartoonish looks bounced down the runway to this track's synth-heavy trap instrumentals and helium-laced vocals singing the
ever-catchy hook, "Le-le-lemonade", "Ca-ca-candy Boys."

Inspired by bold Spanish artists such as Velázquez and Goya, the Brit designer delivered a deep color palette that begged for all the drama. Singer/producer Ryan Lott's collab with Lorde brought plenty with its haunting, lo-fi instrumentals and sinister vocals.

5. "Work It" by Missy Elliot at Tommy Hilfiger

On the heels of  the super bowl, which boasted a surprise performance from Missy "Misdemeanor" Elliott herself, Hilfiger looked to the rapper's perennially-loved 2002 track. We got the best kind of déjà vu when the designer transformed his runway into into a green turf inspired by American football and beloved 1970 film Love Story. He's got spirit, how 'bout you?

6. "The Day Is My Enemy" by The Prodigy at Alexander Wang

A Wang runway soundtrack is nothing if not captivating, and given that Wang went back to black-on-black-on-black, this bass-heavy ode to the night got all the front row heads—Kanye West and Nicki Minaj among them—nodding.

Sorry Kanye, but Beck's rap game is tight, especially over these groovy acoustic guitar strains and synthesizer riffs. The number served as a cool contrast to Gurung's glamorous, yet majestic offerings, which were inspired by the Adirondacks.

8. "Boys Wanna Be Her" by Peaches at DKNY

Donna Karan continues to fixate on the ultra-cool New York woman, and if there's one track that belongs on her on-the-go playlist, it's this New Wave-esque girl power anthem. It was featured on the Whip It soundtrack, which was directed by our spirit animal Drew Barrymore.

9. "Rock the Casbah" by The Clash at Tory Burch

Burch described her vision as "Marrakech meets Chelsea," and what song is more fitting for a Br-It girl than this 1976 English punk rock classic. The rollicking instrumentals and rogue lyrics gave the mod-meets-Morrocan wares all kinds of edge.

10. "Autumn's Child" by Captain Beefheart & His Magic Heart at Creatures of the Wind

Designers Shane Gabier and Chris Peter riffed off the psychedelia of the late '60s and '70s and looked to rock legend Captain Beefheart for his blues-inspired, experimental ballads. We're not sure whether its the the clothes or this song that has us counting down the days 'til the leaves turn.

Lauren Valenti Associate Web Editor I’m the associate web editor at Marie Claire.
Advertisement - Continue Reading Below
More From Culture
39 Movies That Are Only About Sex
'Good Girls' Is Back for an Explosive Season 3
Advertisement - Continue Reading Below
Netflix's 'Haunting of Hill House' Will Return
Criminal Minds Season 15 Will Be Its Last
The Hot New Podcasts to Add to Your Queue
Who Are the Women of 'The Bachelor' in 2020?
Join Marie Claire's Virtual Monthly Book Club