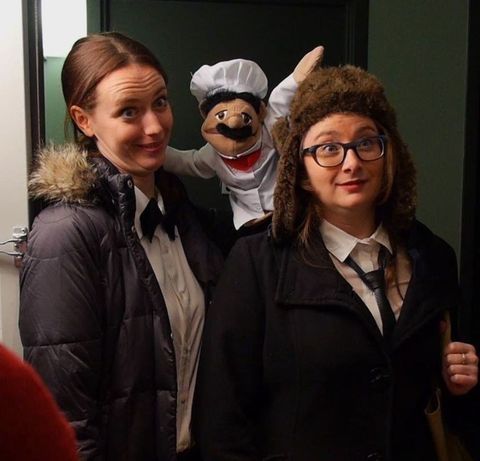 Web series are the new Netflix. Hear us out: They're just as addicting but have the entire art of one House of Cards episode crammed (skillfully) into five minutes, taking binge-watching to a whole new level. Instead of finishing five episodes on one particularly lazy Sunday, you can finish every season. It's genius.

Similar to thousands of YouTube hopefuls striving to become the next Justin Bieber, there are a ton of web series out there and even five minutes wasted is time you'll never get back. So here is a list of the best web shows for every cool girl so you can cut through the pack and begin the binge.

Comedians Katie Hartman and Leah Rudick both write and star in this hilarious series about two girls in "New York Titty" and all their crazy adventures starting with their sandwich business that gets a little sketchy.

The Misadventures of AWKWARD Black Girl

Awkward black girl follows the life of J who is truly, well, awkward. J is just trying to make it in the world, but the uncomfortable interactions never seem to end. From dealing with the one co-worker who can never take a hint to navigating her first interracial relationship (with a guy also named Jay), this addicting series will have you immediately hooked. Look out for more misadventures heading to ABG soon.

Disclaimer: we love the Olsen girls but this unofficial, parody biography of Mary-Kate is something you have to see. Produced by College Humor, the show details her life as a rich, struggling college girl who loves diamonds almost as much as she loves herself and to torture her bodyguard.

If you love Mad Men, Whatever, Linda is the web series for you. The Canadian "dramedy" is set in the 1970's and follows Linda Thoroughbred, a down-on-her-luck, 30-year-old woman who finds opportunity and riches on Wall Street—until it all comes crashing down.

This one is for all the sci-fi fans out there. The world of H+ is set in the future where the age of technology continues to reign. People are lining up by the thousands to get micro-implants–basically the iPhone 6 in your brain. When a virus hits, only a few are left in the post-technological-apocalyptic world. Even though you thought you were tired of the doomsday trend, H+ is a fresh take that will keep you clicking through.

It's the web series that everyone's raving about, so naturally you have to experience it for yourself. It's all about weed all the time, which means a lot of nonsensical laughing and some serious munchies.

Everything You Need to Know About theVeronica Mars Web Series

Simedar Jackson I'm Simedar, an intern here at MarieClaire.com!
Advertisement - Continue Reading Below
More From Culture
Jennifer Lawrence Will Star In a Netflix Film
Who From Bachelor Nation Will Be on the 'Games'?
Advertisement - Continue Reading Below
The Best Romantic Films of the Year (So Far)
An Investigation Into the Next 'Bachelorette'
Mindy Kaling & Priyanka Chopra Team Up
How the 'To All the Boys 2' Soundtrack Was Made
Does 'Bachelor's Madison Prewett Self-Eliminate?
How Much Does 'The Bachelor' Make?
Tales of a Hollywood Con Queen
Who Will Be on 'Bachelor in Paradise' in 2020?