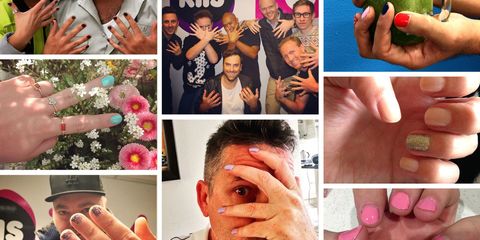 In his* groundbreaking interview Friday, Bruce Jenner told Diane Sawyer how badly he wanted to "be able to have my nail polish on long enough that it actually chips off." His words inspired an ongoing conversation surrounding transgender Americans and a more global solidarity movement that began in, of all places, Australia.

To show support for the Olympian, radio station KIIS 1065 started #PaintYourNailsForBruce and offered free manicures to anyone willing to go to their Sydney offices. While many women have participated, some re-tagging their old photos, there have been an overwhelming number of male adopters around the world.

#PaintYourNailsForBruce Some women are born in their bodies... Others have to fight for it.

Isn't this awesome? Acceptance and colorful varnish are two trends we can always get behind.

*Editor's note: Marie Claire wishes to be sensitive to and supportive of Jenner's transition. During Jenner's ABC interview Friday, Sawyer stated that he prefers to use male pronouns as they're what's most comfortable for him at this time.

The Flood of Celebrity Support for Bruce Jenner Is Moving, Will Make You Cry

Trans Women *Are* Real Women: Janet Mock on How Her Role Models Shaped Her Journey