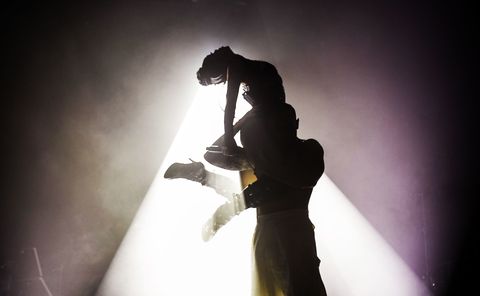 "Push things forward, instead of dumbing things down," FKA Twigs begged during last night's curtain call—and having both commanded the stage like Beyoncé and mystified the crowd à la Björk, rest assured: she's a provocateur who practices what she preaches.

For the third night in a row, the Brooklyn Hangar warehouse in Sunset Park reached a fever pitch thanks to Twig's "Congregata" show, self-directed with assistance from Ryan Heffington and choreographer Aaron Sillis, which she staged in London last year, and reprised for New Yorkers as part of the Red Bull Music Academy Festival. Congregata, which she translates to "coming together" in Latin, was just that.

While Twigs was, and will always be, a force to be reckoned with on her own (if you haven't heard her, may we recommend blessing your ears with "Water Me" or "Pendulum"), the performance was nothing if not a collaboration bolstered by a four-piece band and a dozen male backup dancers—including voguing legends David Magnifique, Benjamin Milan, Dominant from Wet Wipez, and members of Vogue Evolution—many of whom were in her conceptual "Glass & Patron" music video. From duckwalks to leg splits, the show was an utter homage to voguing with fiercely-acrobatic battles, each slave-to-the-beat contortionist more nimble than the next.

"A lot of people on YouTube and Instagram say 'Twigs is the queen of voguing.' But I'm really not, I'm still learning," explained Twigs to the crowd. Modesty aside, her professional-trained dance prowess and ethereal, avant-R&B vocals were on full display both solo and accompanied by her troop. It was a true spectacle for the senses, from her most sexually-charged track "Papi Pacify,"during which she exercised her carnal powers entwined in a dancer's arms, to "Two Weeks," where she snaked around the stage swirling an ultra-long ribbon of red chiffon through the air as she amorously cooed, "You know I'd quench that thirst." Editor's Note: Hot. Damn.

While some might argue that Twigs has gained more recognition because of her fiancé Robert Pattinson (who we may or may not have bumped into at the bar), we can say with conviction that her out-of-this-world vision and rapturous presence will be blowing minds for years to come. And Congregata as a standalone entity is already something of legend, if the chatter amidst the 2000-person crowd pouring out of the Hangar was any indication.

Drew Gurian, Red Bull Content Pool)
Lauren Valenti Associate Web Editor I’m the associate web editor at Marie Claire.
This content is created and maintained by a third party, and imported onto this page to help users provide their email addresses. You may be able to find more information about this and similar content at piano.io
Advertisement - Continue Reading Below
More From Culture
Thoughtful Gift Ideas for the Work Wives You Miss
How to Join Marie Claire's Online Book Club
Advertisement - Continue Reading Below
Read 'Plain Bad Heroines' With Us in November
'The Undoing' Is Based on a Beloved Book
Who Is Hugh Grant's Wife?
Queen of the Screen
The 12 Sexiest LGBTQ+ Movies Around
53 Wild and Completely Iconic Vintage Porn Films
Dale Moss Is a Super Important 'Bachelorette' Star
It's Been a Weird Year for 'The Bachelorette'