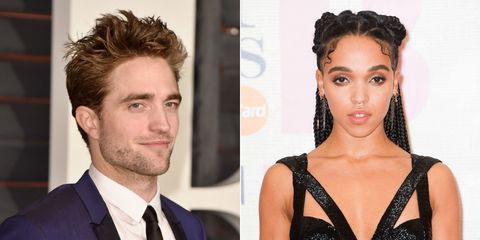 Update, 4/1: Well, looks like those crazy kids went and did it.

In a Q&A with Vulture that was supposed to be about his new mixtape, T-Pain (T-Pain!) very nonchalantly/big-mouthedly let slip three important facts:

Are you not rolling in the aisles from the absurdity of it all? Nobody famous is probably going to tell T-Pain anything important anymore, but if I were a secretly betrothed celebrity, I wouldn't want it announced to the world in any other way.

Original post, 3/4: Aesthetically cohesive couple Robert Pattinson and FKA Twigs have only been dating for approximately six months, but they've already been through a lot together: ignorant Twitter comments, frequent paparazzi-dodging, daily check-ins from Sienna Miller and Tom Sturridge because they seem like the sort of well-meaning matchmakers who would do that.

So is it really a surprise that, if they can survive all that, they'd want to get married…eventually?

E! News reports that after RPatz took Twigs home to meet his parents during the holidays, he popped a variation of The Question over an "I-want-to-marry-you-maybe" dinner. No date except "someday" has been set, but according to E!'s source, they could tie the knot as soon as this summer.

Potential congrats to the Tumblr-y twosome. May your theoretical wedding be genuinely fabulous.

SPOTTED: Robert Pattinson Out With His New Girlfriend

Robert Pattinson Finally Speaks Out About the KStew Affair

Chelsea Peng I'm Chelsea Peng, the assistant editor at MarieClaire.com.
This content is created and maintained by a third party, and imported onto this page to help users provide their email addresses. You may be able to find more information about this and similar content at piano.io
Advertisement - Continue Reading Below
More From Celebrity
Will & Kate Are Nervous About George's Future
George Won't Be Forced to Go to Boarding School
Advertisement - Continue Reading Below
Diana Would Have Written a Memoir Too, Friend Says
A Slice of Diana's Actual Wedding Cake Is For Sale
Matt Damon Trolled Ben Affleck and Jennifer Lopez
This Old Video of the Queen Saying "Nah" Is LOL
Diana Had a Secret Message on Her Wedding Shoes
Will's Friends Made "Jibes" About Kate's Mom
William Will Suffer "Worst" from Harry's Memoir
Simone's Boyfriend Sent Her the Sweetest Message