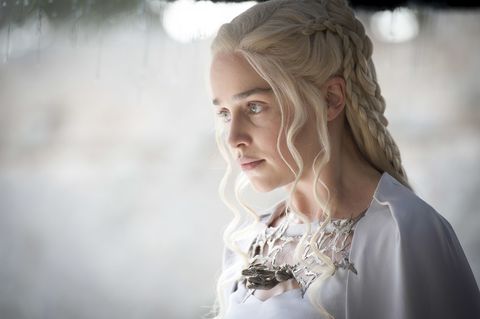 1. Brainwashed servants will rat you out every time, guaranteed.

What Happened: Sansa Stark told "Reek" that she wanted to escape from her psycho-hubby Ramsay Bolton's clutches, and that he needed to light a distress signal for her to get her family's friends in the North to save her. He promised. Naturally, Reek then told on Sansa and her sweet cleaning lady got flayed. Sigh.

The Lesson: It's one thing if he doesn't have a d*ck (sometimes eunuchs makegreat romantic partners!), but it's another if he's been trained as a human lap dog. DO. NOT. TRUST.

2. As long as it pleases the Lord of Light, sacrificing a child is, like, totally cool.

What Happened: Stannis Baratheon is about to take the North from the Boltons, but since he's the Unluckiest Man in Westeros, Red Priestess Melisandre thought it'd be a good idea to sacrifice his daughter. (There's power in king's blood, etc. etc.) Stannis, also the most stubborn person in Westeros (and No. 1 Dad), rejected her wisdom.

The Lesson: Winning has nothing to do with strategy or a well-trained army—just good old-fashioned sacrifice. Explain that it's for the good of the realm; your kid will definitely understand.

3. Keep your side-piece happy by explaining that your marriage is a sham.

What Happened: Daario Naharis confessed to Queen Daenerys Targaryen that he's a little jealous of her upcoming marriage to Hizdahr zo Loraq. Dany was like, "Don't worry, bro, it's just a political move. We can still be friends with benefits." After hearing her comforting words, Daario suggested butchering all of Meereen's noble families.

The Lesson: If your side-piece starts getting all sensitive about your impending wedding, tell him to chill out: Marriage is merely a political construct designed to advance your professional and social status, and so that rebels will quit killing your fighters. Y'all can still bone!

4. If some guy doesn't think you're the most beautiful girl in the world, convince him with poison.

What Happened: Bronn refused to say that Tyene Sand is the most beautiful girl he'd ever seen, so she showed him some boob and then, oh yeah, explained that she poisoned him last episode and that only she holds the antidote—between her boobs. He quickly changed his mind.

The Lesson: You're a beautiful, special individual, and sometimes it just takes a little poison for people to realize that.

5. Part of your fiancé's family wants you killed. So what? Not a big deal. Love conquers all.

What Happened: Jaime Lannister tried to convince his niece/child of incest Myrcella to come home since it's probably not a smart move to stay with your fiancé when his relatives—a clan of highly-skilled female assassins—already tried to kidnap you.

The Lesson: If you really love someone, don't let anyone get in the way, even relatives who can crush you with their pinky fingers.

6. When your true love is recovering from a near-fatal beatdown, hop on top of 'em and do the damn thing. It's the perfect moment.

What Happened: While attempting to defend Gilly from Night's Watch PUAs, Samwell Tarly was turned into a human Whack-a-Mole, sustaining about a 101 punches to the head. Later that night, while Sam was barely able to move, his wildling love helped him feel better by mounting him.

The Lesson: If your romantic partner is still healing after getting pulverized, don't miss out on an opportunity for a nighttime romp. Who cares if every inch of his body is in pain; he won't mind—it's sex!

7. Religious zealots are immune to the powers of razor-tongued grandmas.

What Happened: Queen Margaery Tyrell's grandma Olenna Tyrell visited the High Sparrow, hoping to secure the release of her grandkids. Sadly, no matter how many word-bombs she lobbed at the old guy, he refused to negotiate.

The Lesson: Your grandma may be a sharp, mean-talking badass, but she is completely powerless against religious fanatics. Grams can't save you this time.

8. Karma's a bitch, ESPECIALLY if you have three children of incest with your brother, slept with your cousin a few times, and orchestrated the death of your husband. (What up, Cersei.)

What Happened: After joyously taunting Queen Margaery Tyrell in prison, Cersei Lannister was detained by the High Sparrow, because incest.

The Lesson: What goes around comes around. If you're dealing with incest and murder, though, it doesn't just come around—it slaps that gloating look off your face and throws you into a cell under the Red Keep, where you will presumably (hopefully) go mad.

Helen Sloan/HBO
This content is created and maintained by a third party, and imported onto this page to help users provide their email addresses. You may be able to find more information about this and similar content at piano.io
Advertisement - Continue Reading Below
More From Culture
The Best Feel-Good Movies to Curl Up With
'Shadow and Bone' Season 2: Everything We Know
Advertisement - Continue Reading Below
Will There Be a Season 3 of 'Virgin River'?
The 'Younger' Cast Plays Trivia About Each Other
The K-Movies on Netflix You'll Be Hooked On
The 12 Best Action Movies of 2021 (So Far)
Ready for a Good Cry? Try a Korean Romance Movie
The Most Eagerly Anticipated Horror Movies of 2021
Jessie Ennis & Charlotte Nicdao on 'Mythic Quest'
The True Crime Podcasts We've Been Hooked On