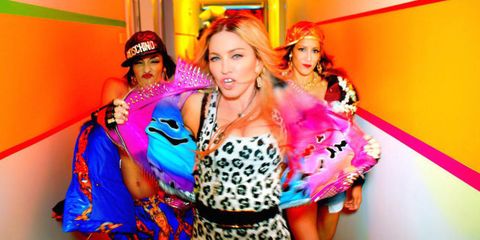 Update 2, 6/17: It's here but only figuratively here, because thanks to Jay Z's mission to save the world from easily accessible music, you can only watch the video for "Bitch I'm Madonna" on Tidal.

From what we can gather, there is a rave and a lot of neon. Miley Cyrus has glitter panda eyes. Katy Perry is there. Beyoncé makes a box around her head. Alexander Wang! Madge throws a shot down Jon Kortajarena's throat, which has got to burn. They all lip-sync the title of the song super close to the camera so you can't tell whose schedule didn't allow them to make the shoot. Not being able to watch the whole thing without paying $5,103,734 a month really blows, but at least we've got the YouTube version for now.

Original post, 6/16: YAAAAASSSSSSS. Madonna and her brigade of "hard werking bitches" are personally working on a new music video for us, which explains why the time stamp on this blessed tweet is 4:25 a.m.

Video coming soon! Just tryin to make it perfect for all of you❤️😄❤️😓❤️😁 we are hard werking bitches! #bitchimmadonna pic.twitter.com/BCPuVK5lHJ

DO YOU SEE THE NAMES? How did they decide the order? (Madonna gets top billing, then Nicki because she's in the song, BUT WHY IS BEYONCE FOURTH? WHEN IS BEYONCE EVER FOURTH? Also, yeah, sorry about Alicia Keys.) How will they fit all their hair into one frame? Will there be synchronized twerking? The visual is expected to drop today, so let's just try to keep our brains from exploding until then, deal?

Chelsea Peng I'm Chelsea Peng, the assistant editor at MarieClaire.com.
This content is created and maintained by a third party, and imported onto this page to help users provide their email addresses. You may be able to find more information about this and similar content at piano.io
Advertisement - Continue Reading Below
More From Culture
Queen of the Screen
The 12 Sexiest LGBTQ+ Movies Around
Advertisement - Continue Reading Below
53 Wild and Completely Iconic Vintage Porn Films
Dale Moss Is a Super Important 'Bachelorette' Star
It's Been a Weird Year for 'The Bachelorette'
Political Books to Read Ahead of Election Day
The Sexiest Movies on Amazon Prime
HBO Is Giving Fans 2 Special 'Euphoria' Episodes
What to Know About Tayshia's 'Bachelorette' Cast
Clare Crawley's 'Bachelorette' Cast Is Out