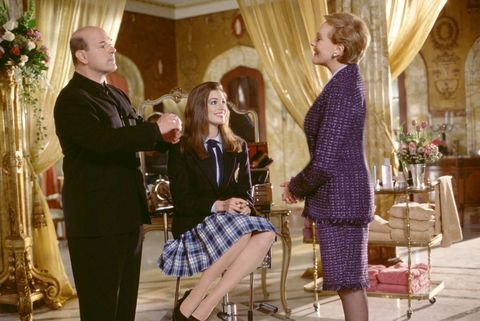 According to Variety, "sources close to the situation" have confirmed Disney isn't developing a threequel, nor is Anne Hathaway even remotely attached to a new script. THEY DID HAVE A MEETING ABOUT IT THO, which is a positive sign in itself. Until we hear more, we shall wait and quietly hum the Genovian national anthem to ourselves.

Original post, 6/17: Seminal teen movie Princess Diaries could be getting a reboot, which is both cause for weeping (GET AN ORIGINAL IDEA, HOLLYWOOD) and unbridled celebration (Julie Andrews singing, proposing to Joe).

A new report from the Tracking Board alleges that Disney is planning a third chapter that "may or may not include [Anne] Hathaway," who became queen at the end of the last film and got to make out with Chris Pine, so it's not like that matters anyway. Instead, as the Dissolve hypothesizes, studio execs might set up a whole new plotline surrounding Mia's half-sister Olivia Grace.

All riiiight. But mostly, I just want them to work Robert Schwartzman (with better hair) back in because she's supposed to end up with Michael Moscovitz, damn it, even if Shonda Rhimes was like, "I don't think so."

This content is imported from YouTube. You may be able to find the same content in another format, or you may be able to find more information, at their web site.
Chelsea Peng I'm Chelsea Peng, the assistant editor at MarieClaire.com.
This content is created and maintained by a third party, and imported onto this page to help users provide their email addresses. You may be able to find more information about this and similar content at piano.io
Advertisement - Continue Reading Below
More From Culture
What Songs Are on the 'Virgin River' Soundtrack?
The Very Best Rom-Coms of All Time, Ranked
Advertisement - Continue Reading Below
Netflix's 'Selena' Cast vs. Real Life
It's Been a Weird Year for 'The Bachelorette'
The Best New Christmas Movies of 2020
Meet the Cast of Netflix's 'Virgin River'
Watch the Trailer for the New 'Euphoria' Special
Zac Clark Could Be a 'Bach' Frontrunner
This Guy Is a Frontrunner on 'The Bachelorette'
Will There Be a Season 3 of 'Virgin River'?