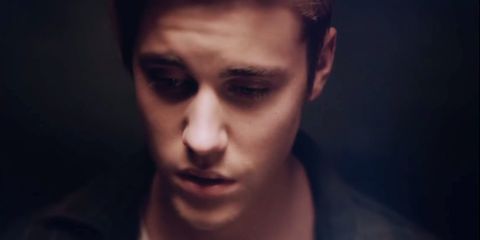 Justin Bieber, persona-formerly-non-grata-but-now-maybe-kinda-grata, released a new music video today for "Where Are Ü Now," his admittedly catchy song with Skrillex and Diplo. Like the song, the video is also pretty catchy. Behold:

It's a cool concept—fans/passers-by/artists were provided still frames from the video, and illustrated each. The effect when viewed at regular speed is trippy and fun...but when you slow it down, things get weird.

As in, self-aware weird. Or poorly-edited weird? Here's what I mean:

Bieber's thinking about weed. And girls.

A stripper makes it rain on Bieber (?).

Bieber wants you to stop worshipping him and go read a book.

And this is just what came up when I clicked the pause button. Imagine the countless of hours of fun you can have poring through frame-by-frame!

So either: The editors of this music video didn't see or have time to weed out (heh) the offensive messages, *or* they—and Justin Bieber—get it. They get how you see him, and they're okay with it, and they're going to make a cool music video that throws your POV right back at you, damnit.

I think it's probably the latter. Or at least I do for now...until I spend the next 13 hours analyzing every single frame. See you tonight?

Jessica Pels Editor-in-Chief As the editor of Cosmopolitan, I oversee the editorial for all of Cosmo's efforts across print, digital, video, and emerging platforms.
Advertisement - Continue Reading Below
More From Culture
The Best New Music of 2020 (So Far)
Listen Up: Gripping New True Crime Podcasts
Advertisement - Continue Reading Below
'The Bachelor' Has Already Finished His Season
Unmissable Horror Movies Coming Out This Year
Who Is 'Bachelor' Peter's Mom Talking About?
Sarah Coffin Might Be a 'Bachelor' Frontrunner
Who Is 'Bachelor' Contestant Victoria Fuller?
Meet the Star of 'The Bachelor's ChampagneGate
Jurnee Smollett-Bell Is a Real Life Superhero
The Best Love Songs to Ever Exist