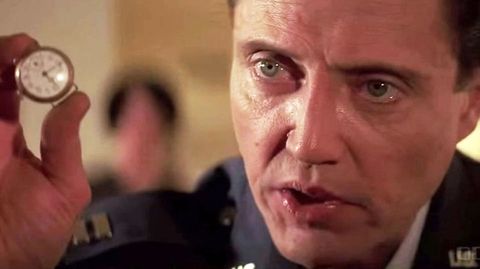 "Uptown Funk," by Mark Ronson featuring Bruno Mars, parked itself for 14 straight weeks atop the Billboard Hot 100. And now, nearly nine months after the song's release, you can see it "performed" by characters in more than 280 movies—including Christopher Walken from Pulp Fiction and Robert Downey Jr. from Tropic Thunder, as well as Shrek, Howard the Duck and a few Ninja Turtles.

The YouTube supercut took three months to make, according to its creator, DonDraperSaysWhat. And it's worth the wait. To see the names of the movies, press the closed captioning button as you watch.

Michael Sebastian Michael Sebastian was named editor-in-chief of Esquire in June 2019 where he oversees print and digital content, strategy and operations.
Advertisement - Continue Reading Below
More From Culture
We Could Be Getting More 'Tiger King'
HBO Is Making Iconic Shows & Movies Free to Watch
Advertisement - Continue Reading Below
Tim Gunn & Heidi Klum Also Wear PJs to WFH
'Parasite' Is (Finally!) Coming to Hulu
The Best Teen Movies of 2020
Family Movies Both Grown-Ups and Kids Will Love
The Best Wedding Movies of All Time
Read 'Anna K' Even If You Didn't Read the Original
19 Most Underrated Films of All Time
The Music Podcasts We Keep Pressing Play On