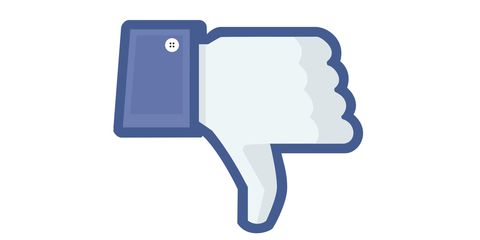 If you've ever wondered when you'd *finally* be able to express your distaste for your high school classmate's super-offensive rant or your little brother's overshare of your awkward tween years or your niece's, uh, selfie—rejoice: The time is now.

Mark Zuckerberg just announced that a "Dislike" button is coming. "I think people have asked about the dislike button for many years. Today is a special day because today is the day I can say we're working on it and shipping it," Zuckerberg said during a Q&A at Facebook's headquarters, according to Business Insider.

The reason they've avoided it for so long? They didn't want to become, well, negative. "That isn't what we're here to build in the world," Zuckerberg said. But the idea has become a priority now that members have expressed their interest in doing something other than "liking" a post—especially when the post is not something particularly likeable.

"What they really want is the ability to express empathy. Not every moment is a good moment," Zuckerberg said.

The button could launch *very soon*—so maybe now's the time to unblock your ex?

Samantha Leal Senior Web Editor I'm Sam, the senior editor at MarieClaire.com.
Advertisement - Continue Reading Below
More From Culture
Sydney From the 'Bachelor' Knows Hannah Brown
The 10 Hottest Movies on Hulu Right Now
Advertisement - Continue Reading Below
'The Bachelor' Has Already Finished His Season
When Michelle Carter Is Expected to Walk Free
How Much Time Did Michelle Carter Get in Prison?
'Bachelor' Peter Made a Hilarious Video As a Kid
31 Movies That Are Only About Sex
Who Is 'Bachelor' Contestant Mykenna Dorn?
The Best Love Songs of 2020 (So Far)
A New Show About the Royals Is Coming to HBO Max