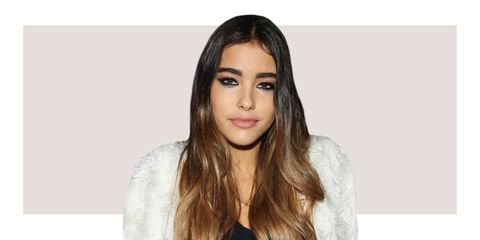 We've been around the sartorial block enough times to know that when the fashion world latches on to you, it's a very promising sign.

Pop star Madison Beer has not only been securing a front row perch at New York Fashion Week, but also boasts a new nuanced spread in CR Fashion Book. (Did we mention she's only 16?) However, these stylish feats practically pale in comparison to her pioneering endorsement: Justin Bieber and his legions of diehard Beliebers.

Beer has had the Bieber seal of approval ever since the age of 12, when he tweeted videos of her performing stirring covers of Bruno Mars and Etta James. Since then, she's lived the ultimate tweenage fantasy, counting Bieber as a confidante, signing with Island Records, and acquiring a steadfast following in the millions on Instagram, Twitter, and Facebook. While Bieber's support has been instrumental in her rise to the top—and, let's face it, Beer's supermodel-good looks haven't hurt her prospects—when you hear her sing, it's clear she has a voice that was destined to be heard.

While we're way past the point of saying we knew her when, we know that Beer, having just dropped her new song "All For Love," is on the brink of even bigger stardom. Just two days before her big release, we caught with the up-and-comer to chat about having Bieber as a mentor, the trials and tribulations of casting her boyfriend Jack Gilinsky in her new music video, coping with the fickle Belieber crowd, and more.

Marie Claire: Fresh off your first New York Fashion week, what are your thoughts on it?

Madison Beer: It was definitely not what I expected it to be. It was a lot more chill than I expected. My favorite show that I went to was the Desigual show. I love Lacoste, but Desigual was the most fun. It had a lot of really bright colors and crazy headphones.

MC: How would you describe your personal style?

MC: You've teased "All Of Love" as having a whole new sound. How would you describe it?

MB: It's a very different vibe than I'm used to and what I've always made. It's not as pop-y. It's more something that I would listen to. I want to make music that I would like if it came on the radio.

MC: And the video?

MB: It's kind of like a racecar vibe. It's following my relationship with my boyfriend through racecars as a metaphor. Jack is the main guy in the video. It was funny because when they said to kiss it was like, okay. If it was a random dude I would have thought, 'Uh, are you sure you want to do this?' But with Jack everything came so easily and was so natural. When they told us to fight and pretend like we were arguing, that was the hardest part for us because we were laughing the whole time and it was really hard for us to fake it because we don't fight often. It was really weird for us to do that, but it was really, really fun.

MC: So Justin Bieber... He helped you get your big break. How did it all happen?

MB: Basically, little Madison Beer in sixth grade was major, major Belieber status. I literally was obsessed with Justin. I wasn't crazy-crazy, but I was a big fan of his. I would always tweet as him "Please follow me! I love you!" I posted my YouTube video and one day‚ while in math class, I found out that my video hit a thousand views. I'm from a small town in Long Island, so a thousand views was like 10 million for me at the time. I was freaking out and thought it was the biggest deal in the world. I was on Justin's twitter and I refreshed it, and the top tweet was of this little girl saying "Thirteen years old. Wow" and tweeted the link to my video. I had a full-on panic attack. I kid you not, I started convulsing. He still is, but he was my hardcore idol that I adored.

MB: We have very similar personalities, Justin and I, so we hit it off immediately. We became really good friends and been close ever since. He's such a great guy and I'm so blessed to have someone as powerful and as awesome as he is involved in my career.

MC: As far as being a mentor and giving you advice, does he advise you on things outside of music, like relationships?

MB: He gives really good advice, because he went through a lot at a really young age, so he's able to preach things to me that he knows about. He's talked to me a lot about relationships, about negativity, a bunch of stuff that helps me with the position that I'm in.

MC: Being so active on social media, how do you deal with the inevitable negativity?

MB: I know the person I am, how my heart is, and what I would and wouldn't do. For the people bashing me and saying really mean things about me every day, they're saying more about themselves than they are about me. If you're calling me a bad person, but you're the one harassing me on social media and calling me a bad person…it shows, you know?

MC: And the Beliebers? We know they can be a tough crowd.

MB: Yeah and those are all girls my age. Of course they're going to envy and get mad at someone who's friends with their idol. I understand where it comes from. I'm not oblivious. I would probably be doing the same thing if there was a girl my age who was friends with my idol and got signed. But I don't think that gives anyone the right to say some of the things they do. Some people can be really vicious. It's really scary. Where are your parents? You're going on social media and bullying someone. I think that's mind-blowing. Kids are taught so much about bullying, and then they go online an hour later and tell someone that they're a slut and should go kill themself. I mean…what?! Don't you pay attention in school when hear about the harassment that goes on? It's crazy. And it's really sad that nowadays it's not taken seriously until something bad happens.

MC: It can be really disheartening! Fortunately you rise above it. On a lighter note, you've got an album in the works, what can we expect from it?

MB: I always say I love Rihanna and she definitely has a big influence on my music sound, because I do admire her so much and love her music. There are some reggae vibes on the album. There are some more ballad-type songs, some indie songs. I love every type of music, so I pulled things from every genre and incorporated it. Or at least I tried to.

MC: And that said, where do you see yourself in five years?

MB: Hopefully on a stage in Berlin, touring the world.

Courtesy of Madison Beers
This content is created and maintained by a third party, and imported onto this page to help users provide their email addresses. You may be able to find more information about this and similar content at piano.io
Advertisement - Continue Reading Below
More From Culture
Suni Lee Just Scooped Up Gold in Tokyo
Movies Everybody Should Watch At Least Once
Advertisement - Continue Reading Below
'Virgin River' Season 4: Everything We Know
'Love Is Blind' Season 2 Is Coming!
Simone Biles' Sister Is Her Fiercest Champion
Simone Biles Quotes to Live By
Could 'Manifest' Come Back for a Fourth Season?
'Bachelor In Paradise' 2021: Everything We Know
Read an Excerpt From 'We Were Never Here'
How to Join Marie Claire's Virtual Book Club