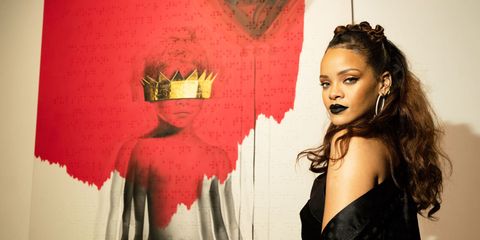 Rihanna loves to keep us guessing, but at this point it's almost cruel that she 1) Hasn't released an album since 2012 and 2) Has teased us endlessly without any *concrete* information. You're killing us softly, RiRi.

Thankfully, we finally have a beacon of hope in the form of an album name, Anti, as well as the release of album art, which Rihanna—donning a pajama-like silk robe, slip dress, and decidedly '90s choker—unveiled last night at an event at L.A.'s Mama Gallery. The artwork was created by artist Roy Nachum and stars the singer herself as a child, wearing a gold crown over her eyes and holding a balloon against a washed red background. On the canvas, writer Chloe Mitchell was commissioned to inscribe a poem in Braille.

"By continuing to follow her own instincts, her work strives to make an impact by doing the very antithesis of what the public expects," she wrote on Instagram. She also provided a definition for Anti, describing it as a person opposed to a particular policy, activity, or idea. Which is very RiRi to say the least.

Alas, while the portrait is a surefire sign that the album will be worth the wait, we still don't have a release date. 😭

Lauren Valenti Associate Web Editor I’m the associate web editor at Marie Claire.
Advertisement - Continue Reading Below
More From Culture
'Too Hot to Handle' Is Your Next Netflix Binge
12 of Netflix's Most Dramatic Movies Ever
Advertisement - Continue Reading Below
A New Ep of 'Tiger King' Will Drop This Weekend
Clare Crawley's 'Bachelorette' Cast Is Out
Will Clare's 'Bachelorette' Season Be Canceled?
The Best Korean Dramas to Get You Hooked
87 Movies Everybody Should Watch At Least Once
The Best Documentaries on Amazon Prime Right Now
Heart-Pumping Action Movies Coming Out This Year
The Best TV Shows on Hulu Right Now