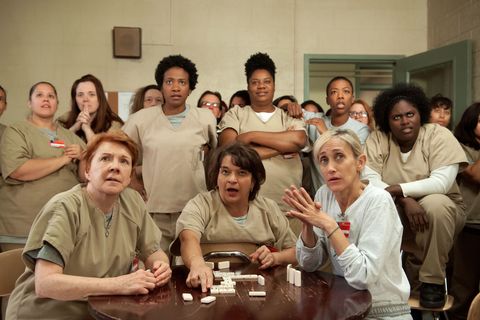 Your epic Orange is the New Black binges just got a little more expensive. Bloomberg reports that Netflix is increasing the price of one of its most popular streaming plans.

But don't worry: It's not by a lot, and at first, only new customers will be affected. Brand-new subscribers will be charged $9.99 a month, instead of $8.99 a month, for its standard plan, in which you can watch on two screens at the same time. The price hike will affect the U.S, parts of Latin America, and Canada, and has already taken place in Europe.

Existing subscribers will have a grace period until October 2016 before the price goes up, so you can switch to another plan if you'd prefer. The Basic plan, which doesn't include HD playback, costs $7.99 for those who only need to watch one screen at a time, while the Premium plan costs $11.99 for up to—four screens and all the bells and whistles.

So if you have your own grown-up account and aren't sharing passwords, you have a full year before the change hits, after which you'll be spending about $12 more a year. Netflix customers are decidedly not happy about this, and they're berating the company on social media.

@stephneee_ as a current customer, you'll be grandfathered in at your current price for a while still! More info: http://t.co/32D5xkhy09

@DODGraphics As a current member your price isn't changing. The $1 change is for new members.

@LaciePassmore So we can brig more great content to users, the price for the 2-stream is going from 8.99- 9.99 for new members.

But if you think about it, $10 a month is still pretty cheap, and still has all the episodes of Friends and House Hunters your heart desires. And some quality time with Joey and Chandler is all worth it in the end, isn't it?