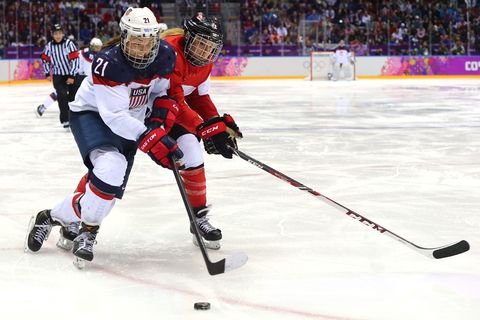 Why? Because, until recently, there was no pro hockey league for women in the U.S. "It's troubling when you've got this skill set and you can't get rewarded for it," says Knight, 26. "A lot of women give up their dream of playing hockey because there isn't a place for them."

Until recently, there was no pro hockey league for women in the U.S.

The  salary is nothing like what their male NHL counterparts receive, but earning a paycheck (an average of $15,000 for the season) is huge for the league's 72 female players, who typically have to foot the bill for equipment, travel, and other expenses on their own. "Now, future generations can say, 'I want to be a professional hockey player,' and have that mean something," says Knight, who plays for Boston.

And like the men who vie for the Stanley Cup, the women will also compete in championship playoffs when the season ends in March. The prize: The Isobel Cup, which, fittingly, is named after Stanley's daughter.

A version of this article appears in the November issue of Marie Claire, on newsstands now.

This content is created and maintained by a third party, and imported onto this page to help users provide their email addresses. You may be able to find more information about this and similar content at piano.io
Advertisement - Continue Reading Below
More From Culture
Will There Be a Season 3 of 'Virgin River'?
The 'Younger' Cast Plays Trivia
Advertisement - Continue Reading Below
The K-Movies on Netflix You'll Be Hooked On
'Shadow and Bone' Season 2: Everything We Know
The 12 Best Action Movies of 2021 (So Far)
Ready for a Good Cry? Try a Korean Romance Movie
The Most Eagerly Anticipated Horror Movies of 2021
Jessie Ennis & Charlotte Nicdao on 'Mythic Quest'
The True Crime Podcasts We've Been Hooked On
Zendaya Shared Pics From the Set of 'Euphoria'