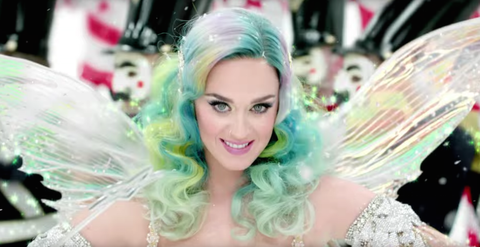 Following in the footsteps of Queen Bey, Katy Perry has collaborated with H&M on a campaign, complete with a smashing new song to serve as its official theme. The best part? It's for Christmas, which is music to the ears of season pushers everywhere.

Titled "Every Day Is A Holiday," it's a track filled with good tidings and all the Perry fixings: cheeky lyrics, chesty vocals, a can't-get-it-out-of-your-head melody, and *sparkles*.

The TV ad also has the pop singer's signature style down to a tee, with Perry assuming the part of an opal-haired fairy alongside a slew of characters in festive costumes (dancing nutcrackers, reindeer, gingerbread men, et al), as well as man candy by way of one shirtless Sean O'Pry. You know, the rich, swoon-worthy asshole from Taylor Swift's "Blank Space" video.

Now, brace yourself because we know for certain this is the first of about 1,000 times you're going to hear Perry's holiday offering this season. The good news is that it's a decidedly worthy alternative to Mariah Carey's brilliant, but overplayed-into-oblivion "All I Want For Christmas Is You." We promise.

Lauren Valenti Associate Web Editor I’m the associate web editor at Marie Claire.
Advertisement - Continue Reading Below
More From Culture
The Best Korean Dramas of All Time
Mainstream Movies With * A LOT * of Nudity
Advertisement - Continue Reading Below
Things Between Victoria F. and Chase Rice Got Ugly
Who Are the Women of 'The Bachelor' in 2020?
Rosalía Is The One To Watch At This Years Grammys
Sydney From the 'Bachelor' Knows Hannah Brown
The 10 Hottest Movies on Hulu Right Now
'The Bachelor' Has Already Finished His Season
When Michelle Carter Is Expected to Walk Free
How Much Time Did Michelle Carter Get in Prison?