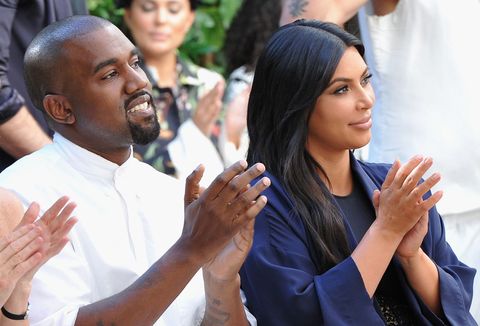 Update, 3 p.m.: In defiance of the internet, Kim Kardashian and Kanye West have named their newborn son not Easton, not Robert (kinda), and certainly not South.

Little Saint's mom took to her official website Monday to make the announcement, while his grandma began brokering an ad campaign with Hedi Slimane to be shot in 2022. Just kidding. But really.

Original story, 10 a.m.: The infant known only as "the Kimye baby" is one step closer to becoming a fully actualized person now that two out of his three names are in place.

A source tells Hollywood Life that Kim Kardashian and Kanye West have given their newborn son an R for Robert after Kardashian's late father, who, incidentally, is being played by David Schwimmer in the new O.J. Simpson biopic. No word yet on the *first* name, but in case Twitter turns out to be wrong about Easton, at least the kid has a fallback.