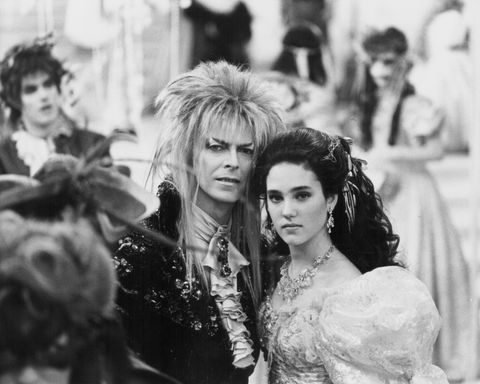 If you haven't seen the '80s movie Labyrinth, you're missing out on a gloriously trippy classic starring the one and only David Bowie, and you should catch up ASAP. Especially since, according to The Hollywood Reporter, the Jim Henson Company is working on a brand-new version with Guardians of the Galaxy co-writer Nicole Perlman.

Here's where things get interesting: Perlman hit back at THR's report, saying that it wouldn't be a remake or reboot at all. "No one is remaking Labyrinth," she wrote on Twitter. "That movie is perfect as it is." (Damn straight.)

Guys, please don't fall for all the clickbait. No one is remaking "Labyrinth." That movie is perfect as it is.

Labyrinth is my favorite film from childhood, so I share your concerns that any continuation of the world be handled with love and respect.

Henson Co & I started talking in late 2014, so the timing of these rumors is so upsetting. I would never seek to profit from Bowie's death.

She told The Guardian that she started talking with the Jim Henson Company more than a year ago, but couldn't discuss any details. Regardless, she wants to make clear that she isn't out to profit from the recent death of star David Bowie. "All I can say is that the timing for the story was awful; it felt like a punch in the gut," she told the newspaper.

The 1986 movie was a total flop when it first hit theaters, so much so that it even convinced Jim Henson to stop directing movies. It slowly became a cult classic thanks to Henson's Muppets and the silly humor from Monty Python's Terry Jones—but let's be honest, it was mostly thanks to Bowie. He not only wrote the movie's iconic songs, but he also played the strangely sexy villain, Jareth the Goblin King, who kidnaps a baby and forces its teenage sister (Jennifer Connelly) to go through a treacherous maze to get him back.

According to Entertainment Weekly, if the new project goes forward, it will be a sequel to the original Labyrinth. Perhaps Connelly is now the mom of her own unruly teenager.