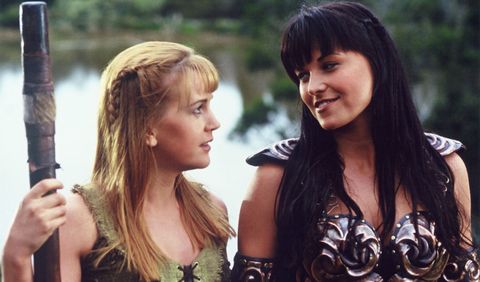 Back in the 1990s, Xena and Gabrielle could only hint at their obvious love for one another on the show Xena: Warrior Princess. Their relationship became the subject of countless GIFs, fan fiction, and YouTube compilations years later. And now that the show is possibly coming back as a reboot on NBC, we now live in a world where they can just be together, no questions asked.

NME reports that Javier Grillo-Marxuach, the executive producer of the reboot, responded to fans in a Tumblr Q&A and assured them that the reboot will be more open about Xena and Gabrielle's relationship. Grillo-Marxuach also runs the show The 100, in which an openly lesbian character stars, and his post addresses that Xena won't dismiss LGBT themes.

"There is no reason to bring back Xena if it is not there for the purpose of fully exploring a relationship that could only be shown subtextually in first-run syndication in the 1990s," he wrote. The show is far from a sure thing at this point, and it's still unclear whether Lucy Lawless and Renee O'Connor would even appear, let alone as Xena and Gabrielle, but we can dream, right?

Interestingly enough, Lawless had told Lesbian News in 2003 that she thought Xena and Gabrielle were "married," and Xena's first relationship with a woman was with Akemi, who turned her away from her evil ways. "Now it wasn't just that Xena was bisexual and kinda liked her gal pal and they kind of fooled around sometimes," she told the magazine, "it was 'Nope, they're married, man.'"

This content is created and maintained by a third party, and imported onto this page to help users provide their email addresses. You may be able to find more information about this and similar content at piano.io
Advertisement - Continue Reading Below
More From Culture
Talk Race & Friendship With 'We Are Not Like Them'
'The Great British Baking Show' Is Back!
Advertisement - Continue Reading Below
Let's Get to Know 'Sex Education' Newbie Dua Saleh
The 'Squid Game' Ending, Explained
'NPS' Director Just Teased a Second Season
Iconic Fall Movies to Get You in the Spirit
The "Berries and Cream" Trend on TikTok, Explained
Fans Are Already Clamoring for 'Sex Education' S4
What to Watch After You Finish 'Squid Game'
The Best Feel-Good Movies to Curl Up With