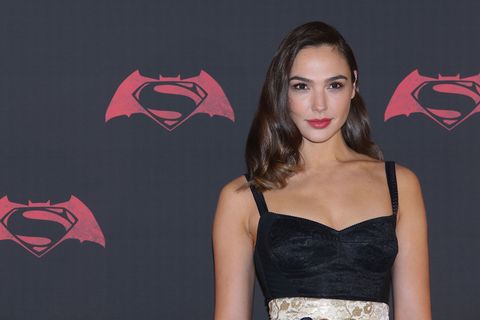 Film critics have said Gal Gadot's portrayal of Wonder Woman in Batman vs. Superman was the movie's only redeeming quality—and that she didn't even get enough face time in the film. Audiences, too, cited Wonder Woman as the main reason they went to see the movie in the first place. But all that excitement around Gadot and Wonder Woman didn't stop some piggish dudes from criticizing the way she looks.

Entertainment Weeekly reports that a bunch of comic-book fans, mainly dudes, criticized how Gadot looks before the movie even came out. On Thursday night's episode of Conan, Gadot said that fans wanted a Wonder Woman with a "bigger heart," meaning, well, bigger boobs, because that's how she's portrayed in the comic books.

"There were some people who had a lot to say about my 'heart,' and at the end of the day, you can't please them all, and I completely understand that," she said. "And if you want to be original to the story, the Amazons used to have only one breast, because it would get in the way with the [bow and arrow]. Eventually after many creative conversations with [director Zack Snyder], we decided to keep them both," joked Gadot.

Not that it matters, but keep in mind that Gadot is a former Miss Israel winner, and also a former Israeli soldier, so if she's getting shamed, there's no hope for literally anyone. In the end, she says she just tries her best to brush off those stupid comments. "You know, men," Gadot told news.com.au. "Every one of them is obsessed with breasts. Honestly, it amused me. It was funny for me that it's such an amazing character and all they have to critique is her bust."