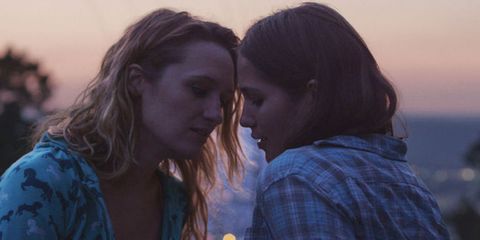 When writing about the popularity of TV shows that portray relationships in a realistic and modern way, Vulture recently dubbed the trend the "rise of the millennial sitcom"—think Broad City, You're the Worst, Girls, Love, Master of Love, and so on—where characters' lives are messier and less predictable than sitcoms of the past.

Instead of knowing what they want in relationships and out of life, the twenty- and thirty-somethings on these shows don't have it all figured out. Their romances often lack labels, because they don't know how they feel, or because they're not so into monogamy. If the end goal for a certain genre of TV characters used to be marriage, it's now less defined.

If the end goal for a certain genre of TV characters used to be marriage, it's now less defined.

At this year's Tribeca Film Festival, a number of films followed a similar pattern, portraying love stories in ways that felt more genuine than many of the blockbuster rom-coms we're used to seeing. Movies that premiered at the festival depicted scenarios from a partner considering infidelity to potential love interests who are totally out of sync with what the other wants to exes who still live together—and more plot lines that don't deliver fairytale endings.

Take Between Us, about two late twenty-somethings who have been together for six years and are contemplating marriage ambivalently. Dianne and Henry (Olivia Thirlby and Ben Feldman) are considering a new, upgraded apartment, and everyone wonders why they haven't tied the knot already. When alone together, neither can seem to do anything right by the other, but they cling to the funny and affectionate moments that remind them how they used to feel.

For awhile, they want to want to still be in love, but there comes a point when even that weak foothold falters. Both are privately considering infidelity, and one evening following a blow-up fight, they have the opportunity to explore their desires and what they mean for their struggling relationship. That relationship is deeply in the should we break up, what is the point of being together? stage that's not often seen in movies. Here, it's played in a highly relatable way.

In AWOL, another film that premiered at the festival, Joey, a young woman in rural Pennsylvania (Lola Kirke) joins the army as a way out of her small town just as she starts falling in love with unhappy housewife Rayna (Breeda Wool). The two decide to run away together, and Joey defects. The movie contemplates what happens when love unexpectedly unsettles the lives we are meant to lead: Joey is supposed to make something bigger of herself, and Rayna has her husband and daughters. It's a beautiful depiction of falling in love, but it's grounded in harsh reality that is explored in depth instead of being glossed over.

Other notable examples include Dean, where seeming manic pixie dream girl Nicky (Gillian Jacobs) has a complicated backstory of her own; Equals, a dystopian love story starring Kristen Stewart and Nicholas Hoult set in a future where no one is allowed to feel emotion; and Women Who Kill, where exes Jean and and Morgan (Ann Carr and Ingrid Jungermann) live and work together and attempt to date other people.

Writing and filming more honest romantic narratives means the women in them are more than love objects.

A major upside to this type of storytelling is that it makes for compelling female characters.Writing and filming more honest romantic narratives means the women in them are more than love objects. Instead, they're complicated, flawed, and dimensional—and, unsurprisingly, all the better for it. Just like it's gratifying to see films that show relationships like the ones we know, it's even more satisfying when the women in them remind us of ourselves.