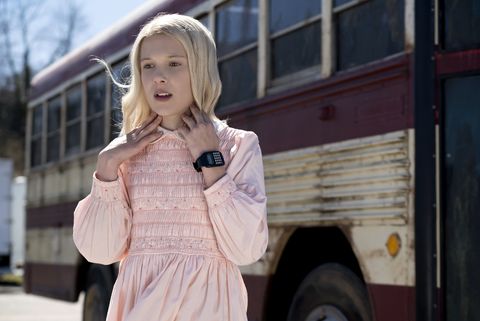 Stranger Things answered a lot of questions during its season finale, but several mysteries are still up for debate—including but not limited to:

1) What's up with Eleven's obsession with Eggo waffles?

2) Is she alive with a stockpile of said waffles?

3) What's the deal with the monster lurking in the Upside Down?

Thanks to a viral fan-theory, it looks like there might be an explanation for question number three.

The video above suggests that—wait for it—Eleven is the monster. Which makes sense considering said monster is modeled on the two-headed, duel personality Demogorgon in Dungeons & Dragons.

"Could it be that the monster's actually a physical manifestation of all the fear and terror that she felt at Hawkins, which then crossed over into our world?" the video asks. "Consider that when she first sees the monster it isn't in the Upside Down world, but in a completely black and empty space that she enters after being placed in a deep trance state. What if instead of sending herself outward into another dimension, she actually went inward into her own consciousness? That would mean that the monster she discovered was part of her."

If you aren't convinced already, UpRoxx points out that a) Eleven killed herself when she killed the monster, b) they even mirrored each other's body language, and c) at one point she literally said "I am the monster."

Sounds kinda crazy, sure, but stranger things have happened. (Ha. Get it? Literally so sorry.)