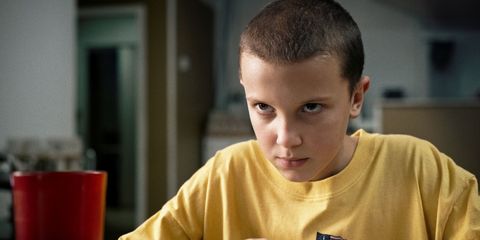 Going through a crazy transformation is a known strategy for winning awards, but 1) it's not like Stranger Things' Millie Bobby Brown needs a gimmick, and 2) nobody since Natalie Portman can quite pull off a shaved head like her anyway.

In a video posted on Twitter, Brown, who plays Eleven on the Netflix show, first has scissors, then clippers taken to her brown waves.

Now that's what we call dedication to your craft. Brown's hair has since grown out into a pixie, but based on rumors that the next season isn't far away, it might be back to the buzzer for the 12-year-old actress very soon.

Chelsea Peng I'm Chelsea Peng, the assistant editor at MarieClaire.com.
Advertisement - Continue Reading Below
More From Culture
Who Will Be on 'Bachelor in Paradise' in 2020?
When Will 'The Bachelor' Women Tell All Air?
Advertisement - Continue Reading Below
'The Bachelor' Has Already Finished His Season
The Very Best Rom-Coms of All Time, Ranked
An Investigation Into the Next 'Bachelorette'
The Best Korean Dramas to Get You Hooked
Who Is 'Bachelor' Contestant Victoria Fuller?
Everything to Know About Peter Weber's Ex
Read an Excerpt From the Uber Whistleblower's Book
The Must-Watch TV Shows of 2020