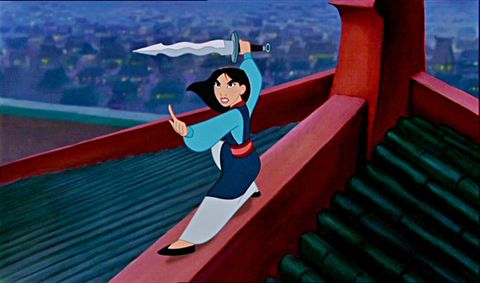 After Rooney Mara played Tiger Lily and Christian Bale starred as Moses in Exodus: Gods and Kings, the world's movie-going audience has more than caught on that Hollywood DGAF about casting white actors as characters of color. But this time, in advance of the live-action version of Mulan, 90,000 people aren't about to let Hollywood do a hatchet job on another beloved Disney classic.

According to Variety, although Sony plans to shoot the remake in China with a Chinese partner and a yet-to-be-announced "mostly Chinese" cast, an online petition pledging to "take a stand against whitewashing" has already begun circulating, with 92K signatures and counting.

"Whitewashing implies that people of color cannot be heroes (although they may at times be villains or supporting characters), leaving it far more difficult for countless children around the world to see themselves in the stories they love and think that they too can make a difference," wrote Natalie Molnar, who set up the petition last year when rumors of the film first began to swirl. "It perpetuates a standard of beauty and goodness wherein whites are considered the ideal and norm despite that not only are Americans diverse, but the entire world is."

Right on. Your move, Sony.

Chelsea Peng I'm Chelsea Peng, the assistant editor at MarieClaire.com.
This content is created and maintained by a third party, and imported onto this page to help users provide their email addresses. You may be able to find more information about this and similar content at piano.io
Advertisement - Continue Reading Below
More From Culture
It's Time To Binge Hulu's Best Documentaries
When Will 'The Crown' Season 5 Be on Netflix?
Advertisement - Continue Reading Below
'The Undoing' Season 2: Everything We Know
Cute Gift Ideas for Every Woman in Your Life
'The Undoing' Differs Sharply From the Book
'The Undoing' Is Packed With Stars
Differences Between 'The Undoing' Book and Novel
It's Been a Weird Year for 'The Bachelorette'
Did Princess Diana Really Dance to 'Uptown Girl'?
'Bachelorette' Frontrunner Brendan Is an Actor