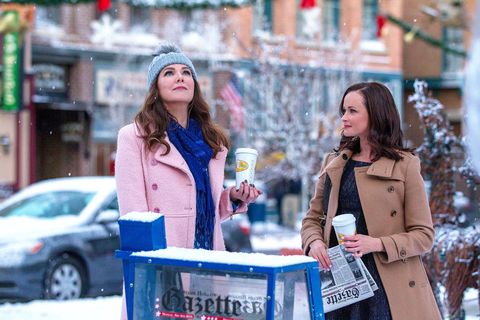 There's another Gilmore Girls conspiracy out there, and no it does not have to do with the show's four final words. It has to do with one of series' most iconic themes: coffee.

Before A Year in the Life aired on November, Netflix released four Gilmore Girls posters for each episode of the show. But fans were quick to criticize the posters on social media, saying that in the four themed posters, Rory (or Alexis Bledel, at least) didn't know how to properly hold things, especially giant coffee cups.

Since the series has aired, a brand-new complaint has been trending on social media. On last night's episode of The Late Show with Stephen Colbert, the TV host informed his guest, Lauren Graham (AKA Lorelei), of what the Internet is thinking of now. Apparently, the way she and Bledel hold the Luke's coffee cups in the series must mean they're empty. Say it isn't so!

"There has been a bit of online complaining that at Luke's you guys drink a lot of coffee, but people online are saying clearly the coffee cups never have anything in them, they look empty," Colbert told Graham.

But not to worry, Graham set the record straight. "I want to tell you one thing, that is a true thing: There is always coffee in my cup," she said.

In addition to talking coffee on the The Late Show, Graham also admitted another truth: She cried majority of the time she was on the Year in the Life set. She elaborated:

"It was so emotional for so many reasons, but one of them was, you hardly ever get a chance, at any point in life, to appreciate the moment you're in while you're in it. And the fact that it was sort of the people who brought us back and we got to finish a story that we hadn't gotten to finish and this character I love so much…I was just a freak, I had so much appreciation. It was actually very overwhelming. I'm not a person who cries very easily, I cried almost every day."

You know what could help ease those tears? More coffee.