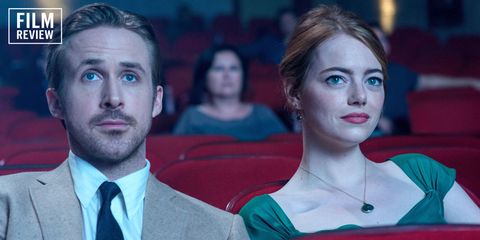 La La Land is a lot of things: it's a surreal escape to a world where romance means breaking out into song. It's a beautiful tribute to all the dreamers out there. It's a chance for Ryan Gosling to tap dance his way into our hearts. And it's undoubtedly the best, most romantic, and most creative movie of 2016.

La La Land chronicles the year-long relationship of jazz-enthusiast Sebastian and aspiring actress Mia (played by Ryan Gosling and Emma Stone), and proves that the bar for romance can be—and should be—set so much higher. That in a world of Notebooks, there are better, far more complex stories of love just waiting to be told. Sure, Mia and Sebastian's relationship rests on a fantastical bed of duets and dance, but the genius of La La Land is its understated realism. After all, falling in love doesn't necessarily mean life is perfect.

That said, La La Land's most enjoyable moments are those of pure fantasy: when Sebastian plays the piano with a passion that can only be topped by Mia's dancing. Or when they share their first kiss and literally drift up into the clouds. These moments might sound over-the-top, but as someone who doesn't typically enjoy musicals—let alone films that aren't grounded in reality—I'll make a happy exception for La La Land. Why? Because instead of asking us to suspend our disbelief, we're encouraged to embrace it.

Director Damien Chazelle knows his audience acutely, and it's hard not to appreciate how meta and self-aware the film is. Take Sebastian's quest to make jazz relevant again, which is a clear nod to Chazelle's attempt to contemporize the nostalgia of musicals. Or, take this moment when Mia's stresses about her one-woman show:

[pullquote align='C']Mia: "It feels really nostalgic...is it too nostalgic? Are people gonna like it?"

La La Land is the very definition of nostalgic despite being set in contemporary L.A., and little moments like this bring millennial relevance to a forgotten genre, while simultaneously wrapping them up in the highly relevant bow that is Emma Stone and Ryan Gosling. Audiences love themselves a Stone + Gosling movie, and their built-in chemistry allows the film to take bigger creative risks. We're already totally here for them as a couple, so why not just go with the romance flow, right?

And speaking of romance, if this movie has accomplished one singular thing, it's turning a genre that's usually deemed unworthy of awards on its head. At the beginning of La La Land, Sebastian asks "Why do you say 'romantic' like it's a dirty word?" Well, prediction: when this divine movie wins an Oscar, it no longer will be.