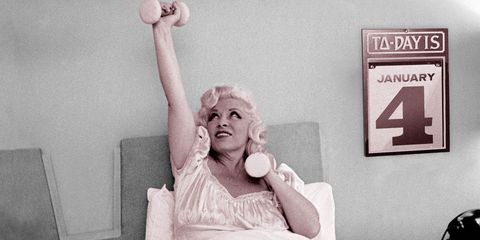 A resolution is expelled from the womb (of your mind), weighing 8 pounds, 3 ounces, plus however heavy your expectations for greatness—derived from a culture that would have a bumper sticker reading "fame, notoriety, or bust"—are. It's got your mother's eyes and her determination but also your father's propensity for shortcuts, which makes for an...interesting combination. Let's see what happens.

I love rising with the garbage men to almost barf on my APLs during a Tone House class! Every Instagram quote incorrectly attributed to Gandhi is self-improvement literature! No vile bagel shall test my resolve!

so blessed. so moved. so grateful. cant believe this is my life. never going to take it for granted. always going to give back. thank you

(No, I'm pretty sure Gandhi said that. Or Marilyn Monroe.)

::smashes a half-petrified office bagel that's not even good::

A woman, near death, runs on a treadmill she's set to 7 (because HITT) but for longer than recommended (because she still can't figure out how to get it down to walking speed quickly, and pulling the emergency cord thingy would be really embarrassing). She pulls it when she begins to see the light.

"Okay, if you think about it, resolutions are very 'nature vs. nurture,' and, like, how are we supposed to figure that out if science still can't agree on it? What if bagels are part of my very DNA? What about being true to yourself, huh? WHY DO I HAVE TO PUT IN SO MUCH EFFORT TO FIT THIS SOCIETY'S DEFINITION OF BETTER??"

Woman loses consciousness, her body rolling gently down to the floor, like in that one video with the Goldfish.

I do not care to discuss it.

Sometime in the second week of January

As tumbleweeds roll across the foam mats where we once did halfhearted sit-ups, and the meditation guides move further down the bedside-reading pile, we come to realize the truth: That we are already perfect. "Never change," they said. And we won't—at least not this year.