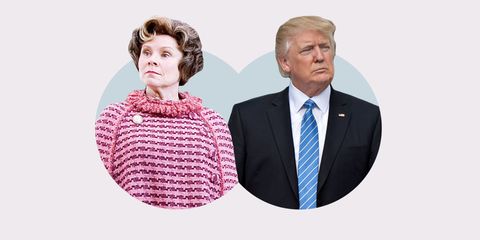 I get it: It may seem 👀 to compare the President of the United States to a character from Harry Potter, but these are the times we're living in. And Donald Trump and Dolores Umbridge have a *lot* more in common than their coiffed hair.

J.K. Rowling wove many socio-political themes into her legendary series, and the most chilling—especially seen through a 2017 lens—is the rise and fall of Professor Umbridge. Through her character, Rowling stressed the dangers of a power-hungry regime and subtly taught Millennials the importance of resistance, which is extremely apt now that Trump is president. Here, all the ways I've noticed that they're eerily similar.

They Invalidate Dissenters and Control the Media

Early on in Order of the Phoenix, Harry Potter attends a disciplinary hearing for using magic outside of Hogwarts. Although Harry was just saving himself from dementors, the Ministry of Magic still tried to expel him. During a hearing, the Ministry called his testimony about Lord Voldemort "convenient" and a "weak cover story." Meanwhile, The Daily Prophet pulled a Breitbart and was relentless in publishing articles claiming that Harry was an untrustworthy lunatic. Sound familiar? It should. FAKE NEWS!

Both Umbridge and Trump Love Humiliating Others

Remember when Donald Trump shamelessly mocked a disabled reporter? It was a cringe-worthy moment that the public will (hopefully) not soon forget.

Likewise, Dolores Umbridge had no problem humiliating professors in public. Remember Professor Flitwick—a renowned Hogwarts faculty member who happened to be small in stature—and how she measured his height in public?

Maybe Trump and Umbridge just have terrible senses of humor. Or maybe their insults are examples of the historically ableist rhetoric fascists use to make examples out of people whom they perceive to be easy targets. ¯\_(ツ)_/¯

They Don't Hesitate to Use Violence

Because of their authoritarian natures, both Donald Trump and Dolores Umbridge have no issue exerting physical force. For Donald Trump, violence exhibits itself sexually (read: grabbing women by the "pussy") and, so far, through broad, vague threats of "sending in the Feds." For Umbridge, she takes things into her own hands:

They Both Abuse Their Executive Power

In what is perhaps the strongest parallel between the two, both Trump and Umbridge wasted no time abusing their power once in charge. Although Trump used to criticize Barack Obama for his use of executive orders to govern, our new POTUS has used his presidential pen frequently to enact swift and extreme change during his first days in office.

Umbridge's version of Trump's executive orders? Decrees. One of her most notorious decrees forced a mandatory disbanding of all student organizations. Like any fascist regime, this rule was enacted to ensure that students couldn't gather and form opposition. She also declared that any student in possession of unbiased news (read: The Quibbler) be expelled. In fact, Umbridge was obsessed with shutting down the media—just like her sinister spirit animal Donald Trump.

Umbridge also gave herself "supreme authority" over all punishments, and censored teachers. It's yet another creepy real-world comparison with President Trump, who is quick to fire anyone who disagrees with him—like former Attorney General Sally Yates.

Finally, Umbridge attempted to pass a decree that would have allowed students to be physically punished. Sounds eerily similar to President Trump's mission to reinstate torture, no?

On the Bright Side, a Downfall Is Inevitable

Just as Dolores Umbridge fell from grace, one can only assume that President Trump will at some point suffer the same fate. But for that to happen, we have to do what J.K. Rowling taught us to: uphold our end of the bargain and unite as civilians from all walks of life.