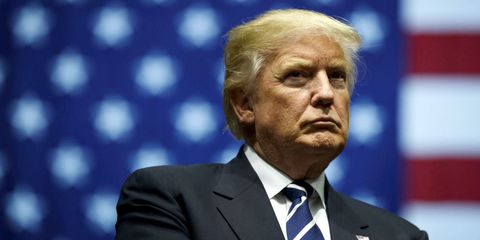 If there's one thing everybody knows about Donald Trump, it's that he has a thick skin. Criticism—especially from the rich, the elite, and the powerful—rolls off him like water off a duck's back. And now that he's president, he's much too busy to spend his evenings bitterly watching television, tweeting angry commentary aboutSNL, and calling his celebrity detractors "overrated."

At least, that's the version of Donald Trump that Sean Spicer would like us all to believe in. During today's White House press briefing, Spicer was asked whether the president would be watching the Oscars this weekend, which—judging by the rest of this year's awards season—are bound to be highly political and packed with anti-Trump sentiment. The journalist also asked how the president would react if any of the night's winners call him out in their speeches, Meryl Streep-style.

"I got to be honest with you, I think the president will be hosting the Governors Ball that night," Spicer replied, according to Deadline. "The First Lady has put a lot of time into this event that's going to occur, and welcoming our nation's governors to the capital. I have a feeling that's where the President and First lady are going to be focused, on Sunday night, so we'll go from there."

Trump went on a memorable tweet rampage after Streep used her speech at the Golden Globes to call him out, and since we're pretty sure he'll have access to his phone—and television—at the Governors Ball, it's hard to imagine he'll stay silent if anyone at the Oscars follows suit.

Emma Dibdin Contributor Emma Dibdin writes about television, movies, and podcasts, with coverage including opinion essays, news posts, episodic reviews and in-depth interviews with creatives.
Advertisement - Continue Reading Below
More From The Oscars 2020
Twitter Is Livid Over J.Lo Not Getting Oscar Nom
Wells Adams and Sarah Hyland at the Oscars
Advertisement - Continue Reading Below
Bradley Cooper's Ex-Wife Comments on Gaga Drama
Bradley Cooper & Irina Shayk's Body Language
Did Bradley Cooper Skip the Oscars After-Party?
Ciara Debuts a Gorgeous Bob With Wispy Bangs
Kendall Jenner's Oscars Dress Was Nearly-Naked
Priyanka Chopra and Nick Jonas at the Oscars Party
Angela Bassett, We Are Not Worthy
The Most Awkward Moments from the 2019 Oscars