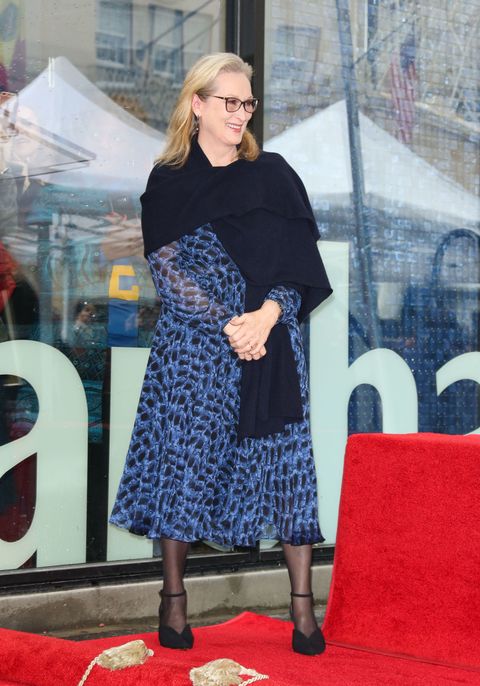 As if an extraordinary highlight reel preceding her Cecil B. Demille Award weren't enough, Meryl Streep went and added what will undoubtedly go down as one of the best acceptance speeches ever—one that skewered Donald Trump's bullying of a disabled reporter, called for freedom of the press, and paid tribute to Carrie Fisher, all at the same eloquent time.

"There was one performance this year that stunned me," she said. "It sank its hooks in my heart. Not because it was good. There was nothing good about it. But it was effective and it did its job. It made its intended audience laugh and show their teeth. It was that moment when the person asking to sit in the most respected seat in our country imitated a disabled reporter, someone he outranked in privilege, power, and the capacity to fight back. It kind of broke my heart when I saw it. I still can't get it out of my head because it wasn't in a movie. It was real life."

"And this instinct to humiliate, when it's modeled by someone in the public platform, by someone powerful, it filters down into everybody's life, because it kind of gives permission for other people to do the same thing," she continued. "Disrespect invites disrespect. Violence incites violence. And the powerful use their position to bully others, we all lose...This brings me to the press. We need the principled press to hold power to account, to call them on the carpet for every outrage. That's why our founders enshrined the press and its freedoms in our constitution. So I only ask the famously well-heeled Hollywood foreign press and all of us in our community to join me in supporting the committee to protect journalists. Because we're going to need them going forward. And they'll need us to safeguard the truth. One more thing: Once, when I was standing around on the set one day whining about something—we were going to work through supper, or the long hours, or whatever—Tommy Lee Jones said to me, 'Isn't it such a privilege, Meryl, just to be an actor?' Yeah, it is. And we have to remind each other of the privilege and the responsibility of the act of empathy. We should all be very proud of the work Hollywood honors here tonight. As my friend, the dear departed Princess Leia, said to me once, "Take your broken heart, make it into art. Thank you."